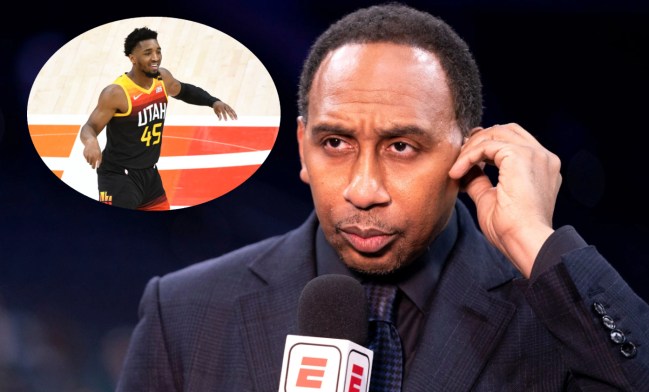 The 24-year-old, back-to-back All-Star selection likely isn’t playing at 100% either given that he missed Game 1 of Utah’s first-round series against the Memphis Grizzlies with an ankle sprain. The Jazz are a perfect 6-0 during this year’s playoffs with Mitchell on the floor.

With his sensational performance throughout the regular season and into the postseason, people, including Stephen A. Smith, are finally starting to shine the spotlight on him that he rightfully deserves.

We all knew that Mitchell was a special, special player, but he’s taken things to an entirely different level this year, to “superstar” level, Smith explained on Friday’s edition of ‘Get Up.’

Smith took things not one step, but two steps further during his love letter to Mitchell on Friday comparing him to Dwayne Wade and already calling him the greatest to ever wear a Jazz uniform. Yes, Smith thinks Mitchell already sits above John Stockton and Karl Malone among Utah greats.

“He’s got a J, got a handle, got an NBA body, is strong, can finish at the basket. He take it to the hole, can create his own shot, can hit free throws. There’s nothing this brother cannot do. In Utah, already, I don’t wanna hear about Karl Malone. I don’t wanna hear about John Stockton. That’s the best player in the history of the Jazz organization right there. I just said it, and I ain’t stuttering.”

Those are some very strong words from Mr. Smith. Stockton is the NBA’s all-time assist leader with 15,806 dimes, over 3,500 more assists than the next best player on that list, Jason Kidd. Malone is seventh all-time in rebounds with 14.968 to his credit.