Stephen A. Smith Has High Praise For Micah Parsons, Calls Him The ‘Second Coming Of Lawrence Taylor’ 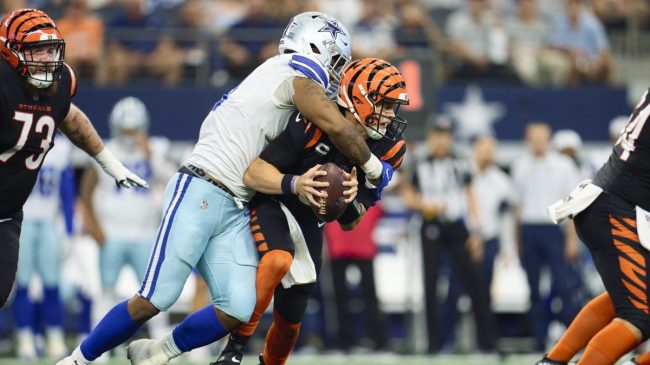 Micah Parsons took the NFL by storm as a rookie in 2021. The Dallas Cowboys took the linebacker with the 12th pick in the 2021 NFL Draft, and the Penn State product didn’t disappoint.

Parsons had 84 tackles, 13 sacks and 20 tackles for loss as a rookie. His performance earned him unanimous AP Defensive Rookie of the Year honors and saw him finish second behind TJ Watt in the AP Defensive Player of the Year voting.

Apparently second wasn’t good enough for Parsons, though, because he’s back with a vengeance in year two. The Cowboys’ superstar has come flying out of the gates in his sophomore season. He already has four sacks and seven quarterback hits through just two games and is staking his claim as the league’s best defensive player.

Parsons’ play hasn’t gone unrecognized, especially by ESPN’s personality Stephen A. Smith. Smith had some high praise for the second-year linebacker on Tuesday.

Lawrence Taylor is widely regarded as perhaps the most dominant defensive player in the history of the NFL. Taylor was a three-time NFL Defensive Player of the Year, a two-time Super Bowl champion and the 1986 NFL MVP.

No defensive player has won the award since. But Stephen A. believes Parsons could be the one to break that streak.

"Micah Parsons is the second coming of Lawrence Taylor. That's how big time that brother is!"

But as always, Smith’s praise for the Cowboys player came with a slight to the team.

“And he still ain’t gon’ lead them to the damn playoffs…the fact of the matter is they ain’t winning the NFC East. I can assure you that…As great as he is, he ain’t gon’ be able to pull that off.”