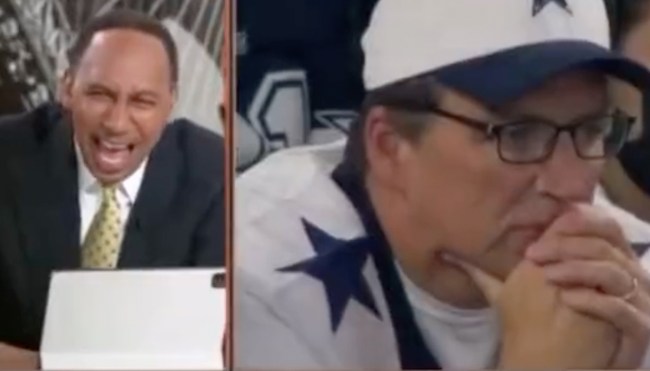 On Sunday, the Cowboys became the proud new owners of a dubious streak after losing to the 49ers in the first round of the playoffs, which marked the 11th-consecutive time Dallas has punched its ticket to the postseason without managing to advance to the conference championship.

During the game, fans were treated to the chance to watch Skip Bayless slowly lose his mind in real-time, and it didn’t take long for his former First Take foil Stephen A. Smith to hop on Twitter and add some insult to injury in the wake of the loss.

However, if you thought he was content with stopping there, you obviously don’t know Stephen A. Smith very well.

On Monday, the personality made his grand return to First Take following a sickness-induced hiatus and, well, it’s safe to say he bounced back from the break without missing a beat. Smith kicked off the program by donning a cowboy hat while throwing some shade at co-host (and Cowboys legend) Michael Irvin, but he was just getting started.

HOWDY ON THIS SPECIAL DAY 🤠 pic.twitter.com/M09moWPe5y

Later on in the program, Smith expertly went Full Heel, as a solid portion of the show was dedicated to him drinking the tears of the sad Cowboys fans featured in a supercut of clips from the game that played while the host laughed like a madman.

Irvin: "This is not part of the show" 🤣😂🤣
HOW BOUT DEM COWBOYS!! @stephenasmith #CowboysNation pic.twitter.com/QUTJqEVeOL

Stephen A is in the zone. Masterpiece this morning pic.twitter.com/SHGRTVmvNU