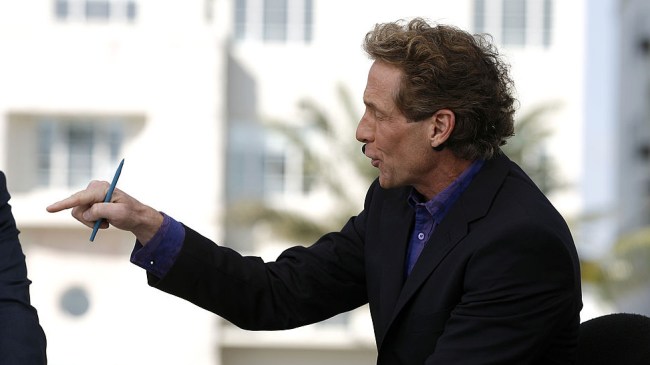 The Dallas Cowboys fell to the San Francisco 49ers 23-17 in the Wildcard round of the NFL playoffs. After entering as a three-point favorite at home, poor performance and undisciplined play led to a close loss in AT&T Stadium.

It was a game in which the Cowboys fell into a massive hole early only to battle back in vain late in the contest. Dallas never led in the outing, and they were dominated in the trenches, allowing nearly 200 rushing yards. The loss will prevent the organization from winning a Super Bowl championship, a feat they’ve not accomplished since the 1995-96 season.

Cowboys’ fans are expectedly upset seeing that this appeared to be a year in which they could make a title run. One of those supporters was talk show host Skip Bayless, who’s known for both his hot takes and his admiration of Dallas. He sounded off on Twitter to show his disgust for his Cowboys’ poor play throughout the game.

Check out the emotional roller coaster ride below.

Things started out with confidence as Bayless picked his beloved Cowboys to win.

That tune quickly changed when the first quarter began. San Francisco scored on each of their first four drives to build a 16-7 lead.

WHY DOES THIS TEAM ALWAYS DO THIS TO ME IN BIG GAMES – COME OUT DEAD-HEADED AND FALL HOPELESSLY BEHIND??? THEY LOOK OVERWHELMED AND OVERMATCHED AND, FOR NOW, OVERRATED. JUST MAKES ME WANT TO PUKE. THIS IS ABOUT TO BE OVER.

What a perfectly nightmarish first quarter in a home playoff game.

Bayless didn’t hold back on pointing out the performance of players, either. Dallas found itself down 23-7 at the half.

Once again, Diggs gets burned. HE'S the NFL's most torchable corner.

NOOOOO. RANDY GREGORY, YOU CANNOT DO THAT ON 3RD AND 6. YOU ARE KILLING US.

Dak Prescott, making $75 million this year, has mostly played like he's worth $7.50 an hour today. He has been far more off than on. That interception just sealed it. Ballgame. Congrats, 49ers.

Bayless had little faith in a comeback, saying on multiple occasions that the Cowboys had already lost the game.

Now, with the game lost, watch Dak "battle back" and "make it respectable" with a bunch of garbage yards.

Mike McCarthy really coached up this team. It led the league in penalties and now it is getting penalized into a crushing loss.

UNREAL. TWO FALSE STARTS ON 3RD AND 4. THE COWBOYS, THE NFL'S MOST PENALIZED TEAM, NOW DO NOT DESERVE TO WIN THIS GAME.

Realistically, from what I saw in the first half, I give the Cowboys a 10% chance of winning this game.

Dallas tried to make things interesting in the fourth quarter, bringing the game to within six points late. A final drive, however, stalled with the matchup ending with a 23-17 Cowboys defeat.

Bayless’s hope briefly grew only to be taken away with a controversial ending. On the final play of the game, Dallas attempted to spike the ball after a long first down to give itself a chance at one final play. With no timeouts, the Cowboys couldn’t stop the clock, and they also had to wait for the referees to spot the ball. Here’s what happened.

The @49ers knock off the Dallas Cowboys on the road! (Via @NFL) pic.twitter.com/we6CQ5fPnC

As you can expect, Bayless was not happy.

WHAT??????? THE UMPIRE KNOCKED DAK OVER. DAK WAS READY. THE UMPIRE WAS LATE!!! HE DID NOT DO HIS JOB QUICKLY ENOUGH. COWBOYS SHOULD'VE HAD ONE SHOT AT THE END ZONE FROM THE 20. DOABLE!!! JUST ABSURD.

I'll be the first to admit the Cowboys didn't deserve to win after committing 14 penalties. BUT THEY DID DESERVE THAT LAST SHOT TO PULL OFF THE MIRACLE. THE UMPIRE BLEW IT. THEY WERE ROBBED OF A SHOT AT YET ANOTHER COWBOYS-49ERS STUNNER. JUST MAKES ME BLEEPIN SICK.

It may take some time for Skip to fully recover from the crushing defeat.

Slow death for me.

Either way, it will be entertaining to follow his takes next week in response to the Cowboys loss.