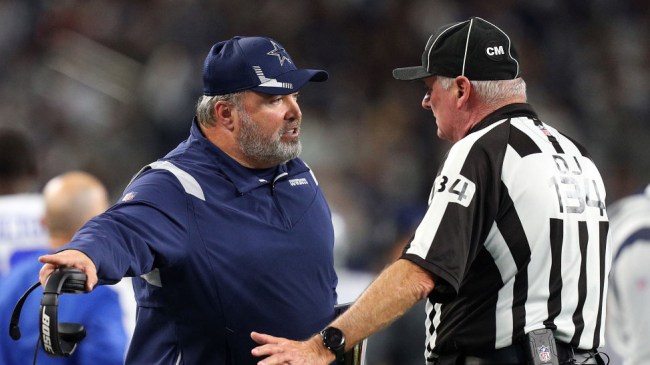 The Dallas Cowboys are in the middle of postseason action, opening up the NFL’s Wildcard round with a matchup against the 49ers. So far, things haven’t gone according to plan.

The Cowboys find themselves facing a 231-7 deficit late in the third quarter with penalties being a main root of the issue. Through three quarters of play, Dallas has been penalized nine times to San Francisco’s three, resulting in 84 extra yards of help for the for the Niners.

While the discipline of the Cowboys has proven to be its Achilles heel all year long (they are the most penalized team in the NFL), they look to have been shafted by the officiating crew on a pair of offsides calls.

Cowboys flags: four for 29 yards
Niners: one for 5.

Trent Williams absolutely moved his left foot and caused that with a false start. Should not have been a flag on Gregory.

Officials with a pivotal mistake.

Dallas was the team flagged for these two penalties, but upon further review, it should’ve been San Francisco that was deemed the guilty party.

On both of Gregory’s neutral zone infractions, 49ers’ left tackle Trent Williams is seen moving his back foot prematurely, causing his counterpart to jump early. Take a look below.

This is false start as a defensive lineman we watch the knee or the back foot of the offensive line to get off the ball. Trent Williams is getting away with false start every snap. @dallascowboys @49ers #DallasCowboys #Sf49ers #DalvsSF pic.twitter.com/o0q2D4vO62

Fans were unhappy with the calls, and rightfully so. The two penalties helped continue 49er drives on their way to building a substantial lead. Cowboys’ supporters have taken to Twitter to express their disgust.

In actuality, another false start by LT Trent Williams. https://t.co/xf0Knpcb5K

Looks like Trent Williams got away with another false start.

The Cowboys will hope to get back in the game with a strong fourth quarter. They’ll need some of these calls to start going their way for that to become a possibility.