Stephen A. Smith Mocks Cowboys For Blowing A 17-Pt Lead Vs. The Jaguars 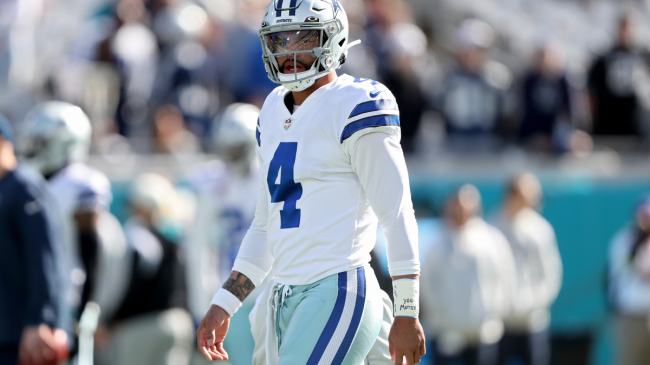 The Dallas Cowboys hit a season low on Sunday in an overtime loss to the Jacksonville Jaguars. The loss dropped the team further back in the NFC East race with the postseason quickly approaching.

Dallas now sits at 10-4 on the year, which puts them in position for a wildcard spot at the moment, but this team doesn’t look nearly ready to make a Super Bowl run.

In the latest defeat, The Cowboys jumped out to a big lead, extending their advantage to 17 points late in the third quarter. One would think that the 27-10 lead over Trevor Lawrence and Co. would be safe with just 20 minutes left in play.

Jacksonville stormed back in the fourth quarter, eventually tying the game with a field goal as time expired. In overtime, the defense would pick off quarterback Dak Prescott for a second time, taking the turnover back for a touchdown.

This loss was bad, even worse than blowing a 14-point fourth quarter lead to Aaron Rodgers and the Packers back in November. Seeing the Cowboys have victory swiped from their grasp, Stephen A Smith took a moment to troll Dallas fans with an epic video rant.

Hey Cowboys' Fan…..Didn't I Tell Ya! Huh? Didn't I tell ya! pic.twitter.com/r7UulBfaiv

“You thought you had it, didn’t you?… You Dallas Cowboys fans are out there shivering. You’re a little bit nervous, aren’t you? Because you know what I know. The end is coming, and it’s going to be before the Super Bowl. And boy, oh boy, is it going to hurt.”

Now, Smith is a known Dallas hater, and he takes every chance possible to gloat at the Cowboys’ expense. But in this case, he may be right.

Dallas appears to be headed for another early exit come playoff time. Last season’s 12-win team couldn’t make it past the first round of the postseason despite having regular-season success.

The Cowboys have already recorded double-digit wins this year, but it won’t matter if Dallas can’t bring home a title.