Stephen A. Smith Rips Colin Kaepernick To Shreds Over Workout Drama ‘He Doesn’t Want To Play, He Wants To Be A Martyr’ 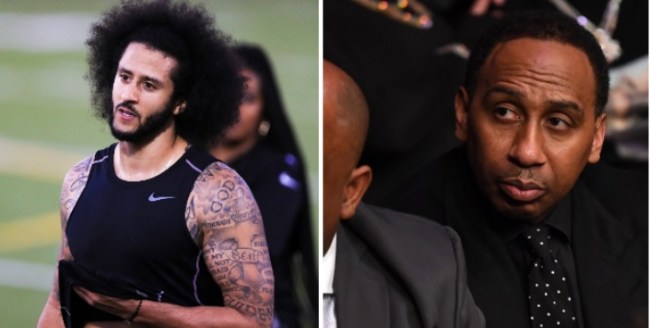 The Colin Kaepernick workout has come and gone but the fallout continues.

On Saturday afternoon Kaepernick abruptly changed the location of his workout in Atlanta after a dispute with the NFL because he wanted the media present and he didn’t want to sign an “unusual” liability waiver.

The NFL released a statement where they expressed disappointment in Kaepernick’s decision to move the workout at the last minute.

NFL’s response to Colin Kaepernick opting to do his own workout today in Atlanta: pic.twitter.com/uvUZGH7CQ5

Kaepernick went through with the workout and had a message for NFL owners afterward.

“We’re out here, we’re ready to play, ready to go anywhere,” “My agent, Jeff Nalley, is ready to talk to any team, I’ll interview with any team at any time. I’ve been ready, I’m staying ready and I’ll continue to be ready.”

Kaepernick thanks scouts from Washington, New York Jets and Kansas City and says: “When you go back, tell your owners to stop being scared.” pic.twitter.com/UMLSrIcn09

—Colin Kaepernick says he'll be waiting to hear from the NFL, Roger Goodell and the 32 teams. pic.twitter.com/6FTAKTtgV4

ESPN host Stephen A. Smith was not pleased with Kaepernick’s antics and blasted the QB in an angry Twitter rant where he says Kaepernick doesn’t want to play in the NFL anymore but wants to be a martyr instead.

He doesn't want to play. pic.twitter.com/ZuSI1IVW9r

“Twenty five teams show up in Georgia at the Atlanta Falcons practice facility — state of the art facility, NFL personnel, equipment, video, everything, and what does Colin Kaepernick do,” Smith said, “Colin Kaepernick wants to change the venue.”

“Guess what? It ain’t working this time. All of us believe that Colin Kaepernick would have showed out, and if he had showed out, I believe he would have had a job inside of two weeks,” “But it didn’t happen, because he didn’t show. He wanted to show up at a high school in Georgia, not an NFL facility and then YouTube it live.”

“You don’t want to work. You just want to make noise and you want to control the narrative,” “It’s over.”