Stephen A. Smith Unleashes On Aaron Rodgers For Being A Bold-Faced Liar 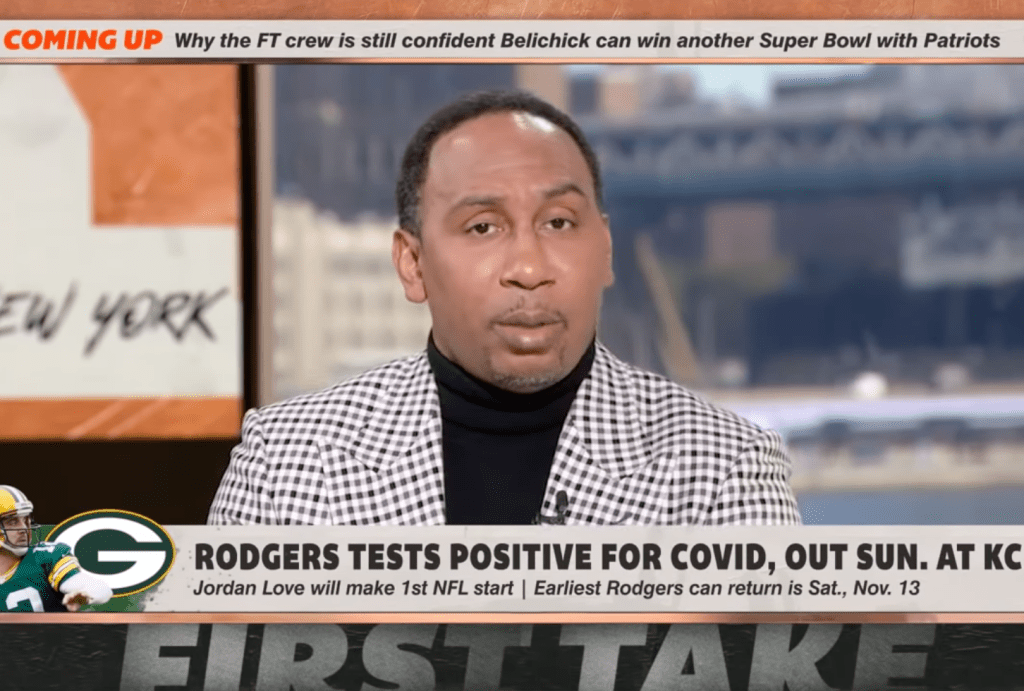 Stephen A. Smith unleashed a rant on Aaron Rodgers and his character today on First Take. I’ll be honest, for the first time in a LONG time, I actually enjoyed hearing Stephen A. Smith go off.

Here’s where we stand: Aaron Rodgers told reporters “Yeah, I’ve been immunized.” He led everyone to believe that was referring to one thing and then went even further and mentioned teammates who aren’t and that he wouldn’t judge them. Here’s that fateful moment:

This summer, @ByRyanWood asked #Packers QB Aaron Rodgers if he was vaccinated and his stance on it.

Did Aaron Rodgers specific ‘covid vaccine’? No. Did he lead everyone to believe that’s what he was talking about and then stick to that lie for months? Yes.

Enter Stephen A. Smith. He’s not here to discuss the importance of Aaron Rogers getting the COVID-19 vaccine (Stephen does mention he’s double vaxxed). Stephen is here to clarify that Aaron Rodgers is a liar. That he told a bold-faced lie to reporters. And now this calls into question everything that’s ever come out of Aaron Rodgers’ mouth. Here’s the rant:

Stephen A. really lays out a lot of choice statements in this segment. After calling Aaron a liar, he goes into this solid simplification of the situation “He wanted the best of both worlds. He didn’t want to follow the protocols but at the same time he didn’t want to tell everybody that he was required to follow the protocols because he gave the impression that he was vaccinated.”

Stephen A. Smith is a HUGE fan of Aaron Rodgers which only makes this segment more impactful. He characterizes Aaron Rodgers as a liar and a coward for not telling people he was unvaccinated against covid, something he led everyone to believe.

The fallout from this Rodgers situation will continue for quite some time. His interactions with teammates, colleagues, and outsiders are all being called into question. Everyone is asking ‘who knew what??’ because at the very least there’s a handful of documented instances where Rodgers broke the league’s rules. But it could be a lot worse. And the flip side of that is Aaron is one of the NFL’s superstars and he knows it.

As Stephen A. Smith said, Aaron Rodgers ‘didn’t want to face the music’ and instead chose to live the lie. Now he’s facing a public reckoning but also doing it from behind closed doors. The music will only get louder in the coming days and weeks and Rodgers will reemerge into the public at some point. To see him already losing one of his biggest champions in Stephen A. Smith is telling.