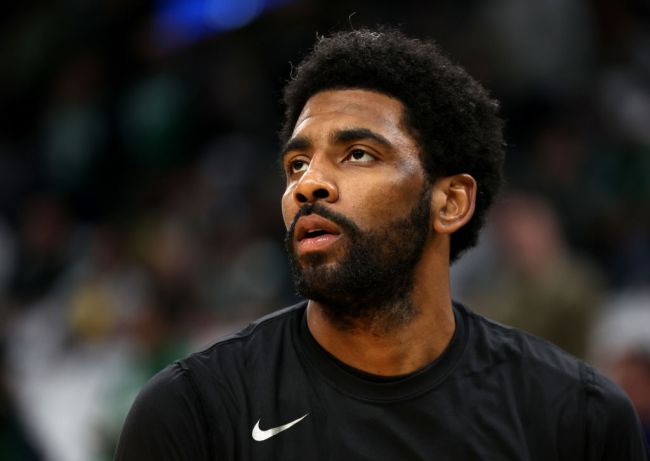 After the strangest year of his NBA career, Kyrie Irving is facing some big questions about his future. Kyrie has a player option for next season on his contract, but it is unclear whether or not he will pick up that option.

According to a report earlier in the week, Kyrie turning down that option could mean the end of his time with the Brooklyn Nets. The Nets appear to be unwilling to give Irving a long-term deal because of his injury history and because of his voluntary absence this season.

That reluctance from the Nets could cause them some problems going forward as they try to return to contender status in the Eastern Conference, but it is reluctance that Stephen A. Smith seems to agree with pretty strongly. Earlier today on “First Take” Stephen A discussed the decision from the Nets and stated that a long-term commitment to Kyrie is something you just can’t do.

No way in HELL you could offer KYRIE a long-term deal! pic.twitter.com/Tjl1l4vJFt

“There’s no way in hell you can do that. If you’re running a business, you cannot invest longterm with Kyrie Irving.”

Stephen A has definitely not been Kyrie’s biggest fan throughout this season, but he’s probably right here about the risk of a long-term commitment to Kyrie Irving. He hadn’t been a player whose availability the Nets could rely on even before this season’s issues.

The Nets could also be investing in a losing team if they invest in Kyrie. They were just swept in the first round of the playoffs, have no cap space to improve their roster, and don’t know what Ben Simmons is going to be for them. Investing in Kyrie with all of that working against them would be a huge risk.