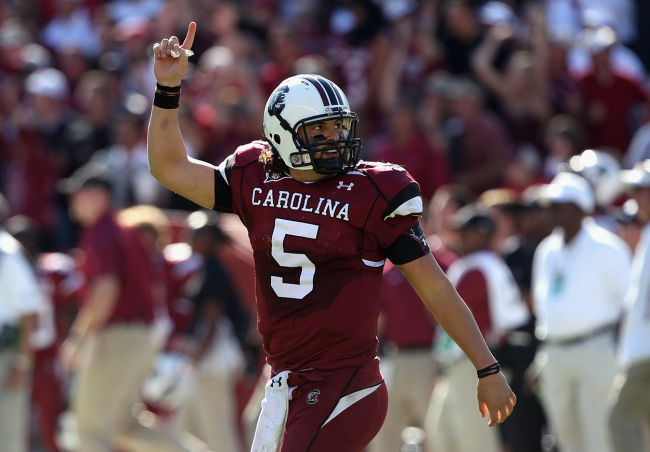 Garcia was never a rule follower and he never minced his words. The former four-star recruit was suspended five times during his college career and was ultimately dismissed from the team during the middle of his final year of eligibility.

Over the course of forty games with the Gamecocks, Garcia completed about 60% of his passes for 7,597 yards and 47 touchdowns. He also added 777 rushing yards and 15 touchdowns on the ground and will be remember for how he played— hard.

Perhaps more importantly, he went 20-14 as a starter and went 2-1 against Clemson during his three full seasons.

Stephen Garcia will forever have the upper hand on the Tigers and he isn’t holding back, even 11 years later.

During a recent appearance on Crain & Company, Garcia said that he thinks South Carolina has a legitimate shot to beat Clemson in this year’s Palmetto Bowl. The former has lost the last seven games in a row to the latter, but Garcia thinks this could be the season that the tide begins to turn.

“I do think they have a chance this season,” Garcia said. “To be honest, I thought we had a chance last year but that obviously didn’t go as we thought. You never know.”

In addition, the 34-year-old took a shot at the in-state rivals and their previous recruiting tactics. He joked that Clemson may have been paying players before it was legal.

“With that being said, I’ll probably catch a little shit for this but I think Clemson got involved in the NIL a lot sooner than some of the other teams did if you catch my drift,” Garcia said.

While his jab at the Tigers may have some truth to it — because we know that college football recruits have been paid under-the-table at programs all across the country for quite some time — Garcia was also able to admit that South Carolina might have been doing the same. Either way, he says that he didn’t get a single cent.

“I’m sure we even did it, who knows? I know I didn’t get any money, which sucked.”

Again, it is very possible that both programs were operating in recruiting with previously illegal payments. It’s what programs had to do if they wanted to compete in that area. There is also a good chance that Garcia, being a top-ranked recruit from Florida, may not be telling the whole truth about his financial compensation.

Either way, the Clemson/South Carolina rivalry runs deep and Garcia is not going to hold back about the Tigers. Shots fired.