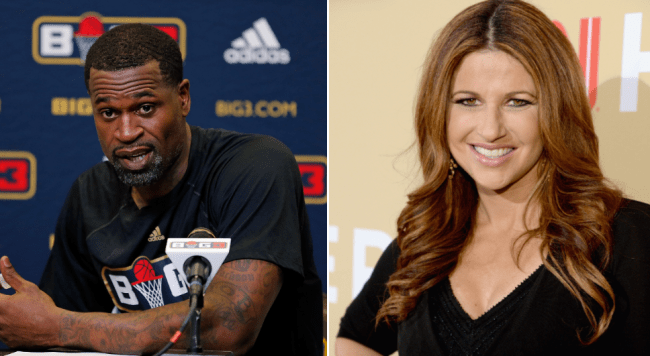 Stephen Jackson has become one of the first people to publicly defend Rachel Nichols over her comments about colleague Maria Taylor that came to light in a bombshell NY Times story on Sunday.

On Sunday, the Times released a leaked audio recording of Nichols, who forgot to turn off her video camera while inside the NBA bubble, calling Taylor a “diversity” hire when she was awarded the hosting job at NBA Countdown during the 2020 finals.

Rachel Nichols: “If you need to give her more things to do because you are feeling pressure about your crappy longtime record on diversity — which, by the way, I know personally from the female side of it — like, go for it. Just find it somewhere else.” pic.twitter.com/aB5MifujuX

“I wish Maria Taylor all the success in the world — she covers football, she covers basketball,” Rachel Nichols said in July 2020. “If you need to give her more things to do because you are feeling pressure about your crappy longtime record on diversity — which, by the way, I know personally from the female side of it — like, go for it. Just find it somewhere else. You are not going to find it from me or taking my thing away.”

Jackson, who has appeared on Nichols’ show “The Jump” over the years, defended his friend by saying ESPN caused the issue by giving Taylor a “sympathy” job to placate the Black Lives Matter movement.

“We all ramble and we say things when we’re frustrated, and Rachel did deserve that job, it’s just plain and simple, I’ve talked to Rachel and I know a lot of things she was saying out of frustrations because ESPN put her in a bad position and they even put Maria in a bad position by trying to give Maria a sympathy job, they were trying to make themselves look good because of the Black lives Matt and the George Floyd stuff was going on.”

Jackson went on to ompare the Rachel Nichols/Maria Taylor situation to how black people feel when they passed over for jobs by white people.

“How many times as blask peope have we said that we was qualified, we know we qualified for the job but we didn’t get it because they gave it to the white person just because he was white, how mad were we because they were looking out for their own? How made were we when you know you deserved the job and they just give to a white person just because they’re white? We’ve dealing with that our whole life and that pissed us off, we ain’t getting recorded but we say shit too behind closed doors. I get it why Rachel mad, Rachel never showed me any signs of being racist but I would be mad too if I worked my whole life for a job and they would give to a white dude just cause Donald Trump is in office”