Smart Or Crazy? Stephen Strasburg Opts Out Of 4-Year, $100 Million Deal With The World Series Champs 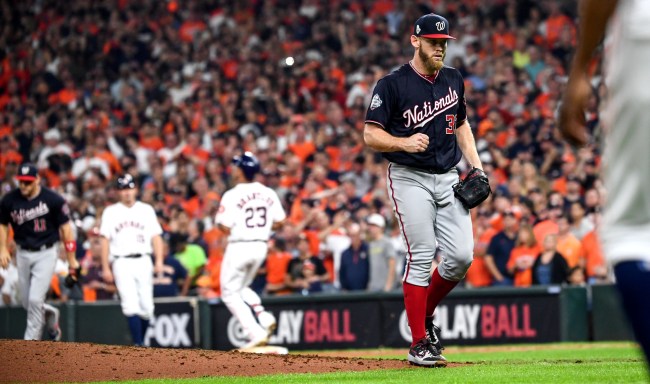 More than 370 pitchers started games for Major League Baseball teams in 2019. Only 8 of them are scheduled to make $25 million or more (9 when you add in Gerrit Cole, who will certainly make more than that.) World Series MVP Stephen Strasburg thinks he should be number 10.

Coming off a career year in which he went 18-6 with 251 strikeouts in 209 innings, won the World Series, and was the World Series MVP, Strasburg, who will turn 32 in July, opted out of a guaranteed 4-year deal with the Washington Nationals worth $100 million.

Strasburg’s contract, which he signed after the 2016 season, was a 7-year deal worth $175 million. He was the highest paid starting pitcher in Major League Baseball in 2019, making over $39 million.

In 2020, depending on what kind of contract Cole signs, Strasburg’s Nationals teammate Max Scherzer will be the highest paid starting pitcher at almost $36 million.

The other starting pitchers that will make more than the $25 million Strasburg was scheduled to earn in 2020 are Zack Greinke, Justin Verlander, David Price, Clayton Kershaw, Chris Sale, Jacob deGrom, and Jordan Zimmermann.

The Nationals will also be paying starting pitcher Patrick Corbin over $19 million in 2020, meaning the team will have over $55 million tied up in just two players’ salaries.

He also is now over nine years out from elbow reconstruction. In 2015, Sports Illustrated reported that from 2012 to 2015 18 Major League pitchers were forced to undergo a second Tommy John surgery.

According to ESPN’s Buster Olney, “Generally speaking, doctors and teams think that a Tommy John repair lasts about seven years.”

The San Diego Padres are reportedly going to make a run at signing Strasburg (he attended San Diego State), as are, of course, the New York Yankees.

So will Strasburg’s $100 million gamble pay off in free agency?