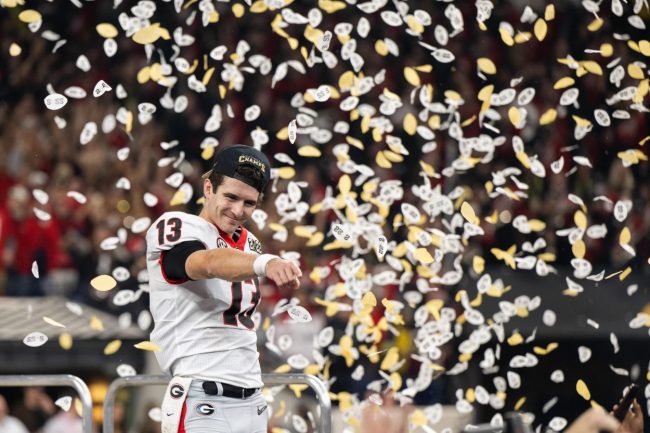 Stetson Bennett is cashing-in on his National Championship win. Just days after the 23-year-old Georgia quarterback hoisted the College Football Playoff trophy, he is out securing the bag through Name, Image and Likeness.

He was a three-star recruit out of high school and was not in high demand by any stretch of the imagination.

After growing up in Georgia, as a Bulldogs fan, Bennett committed to UGA as a walk-on. After one year with the team, head coach Kirby Smart denied him a scholarship unless he was to spend some time on the Juco level.

So Bennett did just that. In his one year at Jones County Junior College, the 5-foot-11, 190-pound quarterback threw for 1,840 yards and 16 touchdowns en route to a MACJC Championship appearance. He did not look like a Division-I quarterback off of the field, but secured offers on the field.

After his one year in Mississippi, Bennett transferred back to Georgia. He didn’t start right away, but due to injuries and various circumstances, he saw some time throughout the 2019 and 2020 seasons.

Bennett earned the starting spot down the stretch again in 2021 and played well enough to get his team to the National Championship.

Upon playing on the biggest stage, Bennett was named offensive MVP of the CFP Championship Game after completing 17 of 26 passes for 224 yards and a pair of touchdowns and directing two fourth-quarters scoring drives. Georgia beat Alabama and any doubt surrounding Bennett getting the job done was put to rest.

Now, in the week following, he is getting that money.

Since winning the Natty, Bennett has been involved in two deals for Name, Image and Likeness with two major brands.

On Thursday, Raising Cane’s put him to work.

In return for some form of (likely financial) compensation, Bennett was serving customers at the local drive-thru in Athens.

He even worked the register, with some help.

On Friday, Bennett secured another paycheck. He let the world know that Great Clips cleaned him up nice.

Scoring a winning haircut at @GreatClips helped me look and feel great for the big game and an unforgettable win! 🏈  🏆 You can use Online Check-in at your local salon to get a fresh haircut in a snap ✅ https://t.co/31OXrANcOr #ad pic.twitter.com/7zPYI4iZzU

For Bennett to partner with both brands was likely very lucrative. Secure that bag, king!