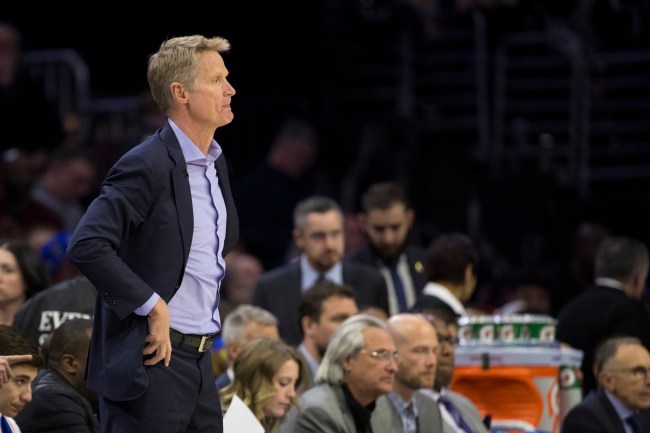 The reigning NBA champions Golden State Warriors are struggling on the court and the frustration might be boiling over on the sideline.

Tonight the Warriors lost to the lowly Phoenix Suns at home.

The Warriors just lost to the 16-52 Suns in Oracle. They are now 4-6 in their last 10 games, this the worst of those six losses. Slump worsens. Now they embark on challenging road trip: at Houston, at OKC, at San Antonio, at Minnesota.

"I'm so f***ing tired of Draymond" is what that looks like, @Mikeweisberg, but we don't know if anything came after that as they cut to commercial pic.twitter.com/Y7I7snkrXj

It sure looks A LOT like Steve Kerr is saying "I'm so f***ing tired of Draymond here pic.twitter.com/iEyYNAcaxC

Of course people on Twitter started tagging Draymond to let him know what his coach was saying.

Damn @Money23Green yo coach ain’t fuckin with you like that? https://t.co/J5ojkaAw6C

In Steve Kerr defense, who not fucking tired of draymond?

@Money23Green you should leave the warriors they don’t appreciate you there man. Even your bum ass coach talking shit about you. Y’all made him what he is. https://t.co/gneSBjW7O7

They don’t love you like that @Money23Green. You thought you was Steph? pic.twitter.com/WQETgTn4KD

ayo @Money23Green dont worry about baby-faced Bill Hanzlik over here, NYC would love to have you https://t.co/0FBna1Y6k8