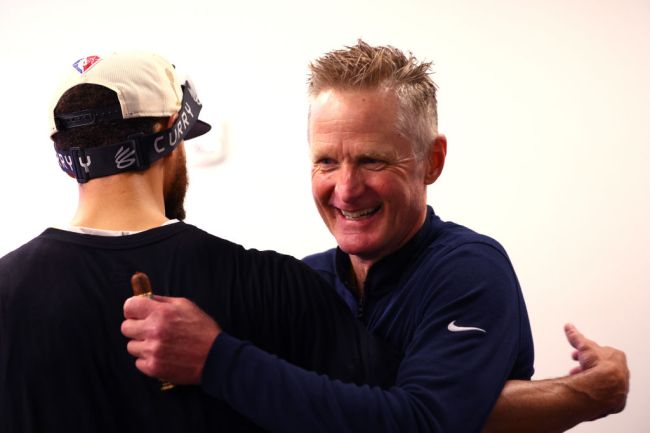 The Golden State Warriors won the NBA title a couple of nights ago and it seems they have wasted no time getting their party started.

It had been reported that before Game 6 even began, they already had a spot reserved for their championship celebration in Boston. Yesterday, head coach Steve Kerr made it clear that they enjoyed that celebration.

As the Warriors got off the plane back to California, there were reporters waiting for them who wound up speaking with Kerr. Right off the bat, Kerr let them know that he was dealing with a hangover from the team’s celebration.

“I’m not going to lie, I’m hungover” – a Hall of Fame quote from Steve Kerr. pic.twitter.com/NGwTnTVnZ1

This is exactly the attitude you want to see from a championship winning coach. This team has gone through the ringer the last few seasons, losing Klay for 2 full seasons due to ACL and achilles injuries and losing Steph for a season because of an injury of his own.

With Klay finally back this year, the Warriors still weren’t expected to win the NBA title, but they went out and achieved something incredible by claiming their 4th ring in 8 years with the same core of players.

They deserved to spend the last couple of days celebrating that accomplishment and it’s good to see Kerr getting in on the fun with his players. Surely, they’ll be partying like champions at least until they get to ride on a parade float again and then they can start focusing on how to make sure they’re partying again this time next year.

Let’s just hope Kerr and his players learned some lessons from Matthew and Kelly Stafford earlier this year when they discussed their hangover struggles after the Super Bowl.