Steve Nash Said He Didn’t Know What To Get KD For His Birthday, Fans Think They Have An Idea… 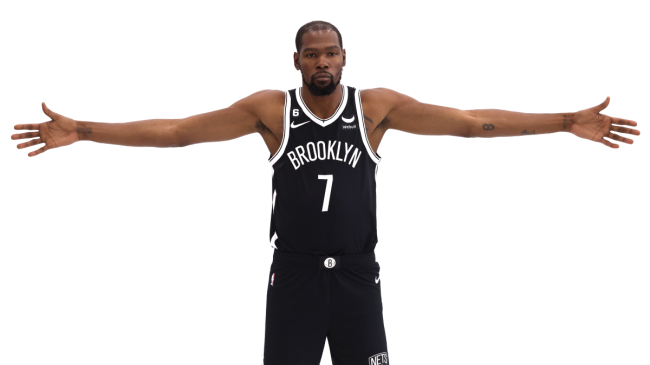 Kevin Durant celebrated a birthday on Thursday, leading head coach Steve Nash to give him a cake during a Nets’ offseason workout. KD got a show, too, with rookie Alondes Williams singing “Happy Birthday” to the superstar, though he may want to stick to his day job.

After the festivities wrapped up, Nash was asked about the celebration by members of the media. Kristian Winfield, who covers the Nets for the NY Daily News, posted the following update on Nash’s reply.

Steve Nash said the Nets had rookie Alondes Williams sing Kevin Durant happy birthday today and that “it was awful.” The Nets got KD a cake but Nash said no Rollie or gift for the star forward.

“What do you get someone who has everything?”

It’s true. KD likely has everything he needs, meaning he doesn’t want his head coach and teammates picking out a birthday present (though he probably wouldn’t have turned down a Rolex). While that may be true, many fans think they know what Durant would’ve asked for if given the chance.

Now, Durant and Nash had a rocky offseason after the Nets were bounced in the first round of the NBA Playoffs. In fact, things got bad enough that KD gave Brooklyn an ultimatum, forcing them to decide between either him or the head coach.

The Nets wound up taking Nash, and they shopped Durant around to potential suitors. None came knocking down the door with offers the front office were willing to take, so when all was said and done, the sharpshooter returned to the roster in Brooklyn.

With that rocky relationship in mind, many fans joked that KD’s birthday wish would’ve been to have a new coach. Take a look at the immediate reaction on social media.

Shit idk maybe figure out some better rotations, run some better plays…yanno the normal things a competent coach should be able to do https://t.co/Njr2zHGzNH

“What do you get someone that wanted me fired?” Steve Nash, probably… https://t.co/kLcMiXDDxR

Nash definitely gave him one of these today https://t.co/COQfBde7ye pic.twitter.com/SPoiI1yexu

Jokes aside, it did look like Durant enjoyed the birthday wishes. He and Nash will team back up next season in hopes of landing a championship.