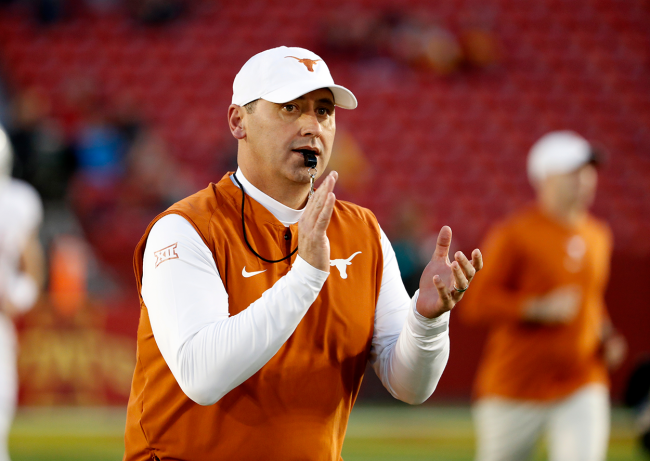 The University of Texas football is ranked No. 6 in ESPN’s 2022 preseason rankings and, as always, there is a lot of buzz about whether the Longhorns are back. Head coach Steve Sarkisian is entering his second year at the helm and there is an expectation to win.

A big part of the excitement surrounding Austin comes with transfer quarterback Quinn Ewers. Ewers is a former No. 1 overall, five-star quarterback who comes with a lot of hype.

However, he may not be the guy this fall. Ewers is currently battling it out with veteran Hudson Card for the starting spot in spring ball.

As things currently stand, there is no clear leader in the clubhouse. Ewers is expected to win the job with time, but Card has been in the system for longer, has a better command of the playbook and is quite talented in his own right as a former four-star recruit.

Whomever ends up getting the nod, Sarkisian wants to get all of his quarterbacks to step it up in terms of their command over the offense. He recently spoke with the media about what in particular he wants his signal-callers to do better.

To try and teach his guys what he wants from them, Sarkisian said that he used NFL quarterback Matt Ryan as the example. He wants Ewers, Card and the rest of his quarterback room to take control of the offense and be in charge.

#Texas HC Steve Sarkisian said he has been working on getting his QB’s to “command” the offense more this spring.

He said he showed the QB room a video of Matt Ryan getting Julio Jones & Mohammad Sanu set presnap to show the control he wants from the QBs. pic.twitter.com/lC42b5Zbrd

Ryan has long been considered one of the top leaders in the NFL. He is well-respected by his teammates and has an incredible football IQ. When you put those things together, it allows the quarterback to be in control of his offense and Ryan is really good at doing so.

Now, as the Longhorns hope to finally live up to expectations, Sarkisian wants his guys to be like Ryan.