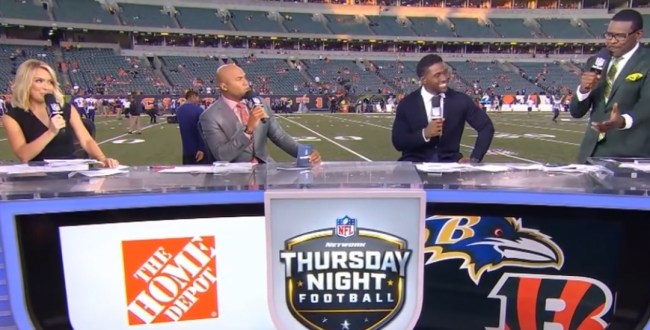 Things got a bit awkward during tonight’s Bengals-Ravens pregame show on NFL Network.

While talking about Joe Flacco hall of fame Cowboys wide receiver Michael Irvin said the Ravens QB hasn’t had a good receiver since Anquan Boldin. Former Revens wide receiver Steve Smith, who was sitting right next to Irvin, felt slighted by his colleague’s remarks and immediately fired back.

Anquan wasn’t the only baller out there, I understand you have the rings but I passed you statistically years ago. There ain’t no route I couldn’t run that you hoped you could run. I got a doctorate in route running, you got an associates degree playa.

Michael Irvin and Steve Smith have a bit of a history. Last year, Irvin made fun of Smith’s pants during an on-air sgment which led to a pissed Smith promising to whip Irvin’s ass.

Despite Smith’s saltiness it seems like most people are siding with Irvin.

Michael Irvin is like Shaq his only argument in everything is “I got 😅(insert # of rings)” every time he gets called out.

9/10 would take Irvin over Steve Smith tho lol. So, it goes deeper than 3 rings too lol

Irv got rings and a gold jacket homie