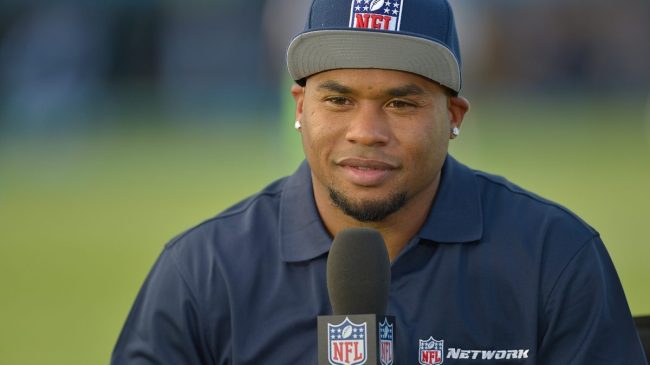 Steve Smith pulled a fast one over the entire NFL on Thursday morning after making an appearance at a New York Giants offseason practice session.

The former Panthers and Ravens wideout announced that he’d be joining the team’s coaching staff for the 2022 campaign, telling fans that they’d be hearing the news from the horse’s mouth as opposed to Adam Schefter or Ian Rapoport.

I’m officially joining the @Giants coaching staff. Coming straight from the source himself. No need to hear it @AdamSchefter or @RapSheet 🤙#TogetherBlue pic.twitter.com/XEebRbtIB1

“Guess what folks, I hate to break it to you, but it’s official. Agent 89, now, is part of the coaching staff of the New York Giants. Sorry, just wanted to let you know myself. Rap Sheet, Adam Schefter, you don’t need ’em. Scoop is here.”

It’s not too farfetched to believe that Smith would join an NFL coaching staff. He played in the league for 16 seasons with Carolina and Baltimore, proving to be one of the top receiving threats of his era.

Over his lengthy career, Smith hauled in 1,031 passes for 14,731 yards and 81 scores. He led the league in receiving in 2005 and he ranks ninth all-time in all-purpose yards. The five-time Pro Bowler should get a hard look at the Hall of Fame.

Since his retirement, he’s stuck around the game. He’s been in broadcast roles with the NFL Network, while also doing some preseason analyst work with his former team.

Unfortunately, however, this announcement turned out to be a charade.

Turns out Smith was just in New York to film for a few days. He is reportedly shooting a piece for the NFL Network and isn’t becoming a part of the staff in any capacity.

It looks like he did help out with the defensive backs a bit while he was there, though.

Former NFL wideout Steve Smith (left, in blue) is here wearing #Giants gear. Told he’s NOT a member of coaching staff. Here filming something for a couple days. But he is helping out on field. Here with the DBs. pic.twitter.com/g3WgbFfhOa

While the announcement turned out to be a hoax, it was certainly entertaining to see Smith fool everyone in the NFL world.

Smith fooled some pretty prominent players and media into believing his announcement. The reaction following the news that Smith’s report was a fake was pretty funny, too.