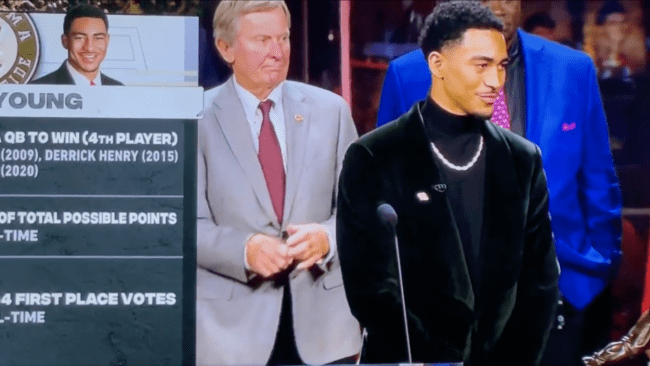 Steve Spurrier must have had important dinner reservations in New York City on Saturday night. The 76-year-old ‘Head Ball Coach’ was in attendance at the Heisman Trophy ceremony but could not have seemed less interested in being there and more interested in getting out.

Ever year, after the regular season comes to a close, the Hesiman Trophy is awarded to the best player in college football. When the winner is being announced, recipients from years prior gather on stage to welcome the newest member into their exclusive club.

Alabama’s Bryce Young was named this year’s winner on Saturday, making him the first Crimson Tide quarterback to receive the award. While he stood on stage to accept the honor, Spurrier, the 1966 recipient, was positioned directly behind the podium.

The ceremony, which admittedly drags out far too long, lasts about an hour. Apparently Spurrier had somewhere he needed to go and was cutting it close.

As ESPN’s Chris Fowler was breaking down the results, right before Young was about to give his speech, Spurrier swiftly flicked his watch out from under his jacket sleeve and checked the time.

Spurrier checking his watch with places to BE pic.twitter.com/nVf9vA0XDl

Although it is undeniably rude, it really couldn’t be funnier.

The ceremony was literally minutes from being over. All that was left was Young’s speech.

And yet, Spurrier couldn’t help himself. He needed to know the time right then, in that exact moment.

To make things even more hilarious, everybody knows how long the ceremony goes ahead of time. It runs for an hour— sometimes a few minutes over. There isn’t really much wiggle room there.

Wherever Spurrier needed to be, he scheduled it based on that timing. It was no surprise to anyone. And yet, Spurrier couldn’t help himself.