Streaker Makes Spectacular Escape At A New Zealand Cricket Match, Almost Gets Away With It 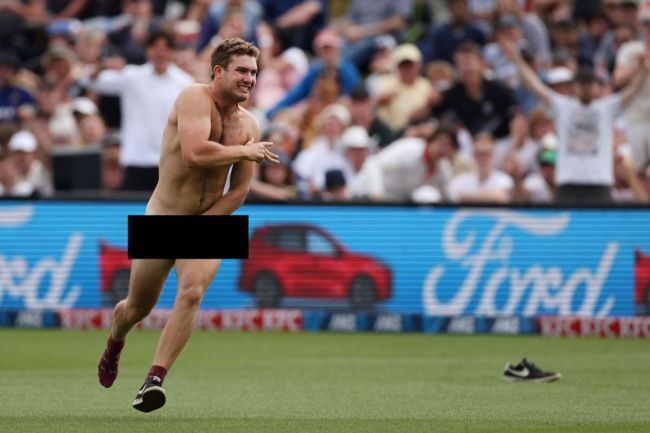 There are very few sports that I can’t speak to on at least an elementary level, but cricket continues to stump me time and time again. Fortunately, there is no knowledge of the game necessary to appreciate this electric highlight from a match between New Zealand and Australia earlier this week.

A man stripped all the way down during the Black Caps’ T20 match at the University of Otago’s Oval in Dundein, N.Z. and took off across the pitch. His near-successful attempt to escape the clutches of law enforcement was caught on camera as he evaded capture amongst a sell-out crowd. The streaker, wearing just one shoe with a pair of purple dress socks, completed his run on the field and took off toward the stands. He made an impressive full-send leap over the playing fence and left two security guards who were tailing him in the dust. After stumbling initially, the man regained his footing and out-ran another security guard in pursuit from his right before serpentining through seated fans. With only one guard to beat, he breaks a tackle to freedom and hops the fence out of the Oval’s outer limits without being caught— or so he thought.

Magnificent effort by this streaker in Dunedin! pic.twitter.com/i3NskxsepG

Unfortunately, his impressive effort fell short and he was reportedly apprehended after getting beyond the stadium’s boundaries.

“Was chatting to a cop as I walked back to the car after the game. They picked him up a few minutes after this. Perhaps surprisingly a naked man running around North Dunedin stands out,” Ian Simpson posted on Twitter.

This is not the first streaking attempt during the series between New Zealand and Australia. Another man attempted his naked run three days prior but didn’t make it off of the pitch. Despite the fact that neither got away, wouldn’t it be nice to attend a full-capacity cricket match with the lads and drink a pint as you cheer on the failed escape artists?