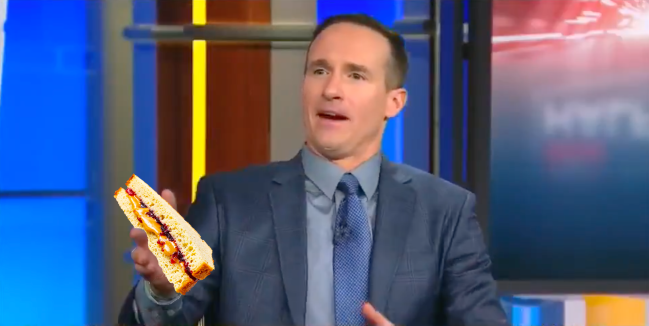 The Buffalo Bills dominated the Kansas City Chiefs from start to finish on Sunday Night Football. However, it took a little bit longer than usual.

As the game went to halftime, storms rolled in over Arrowhead Stadium and the game was delayed. During the break, NBC’s sideline reporter Michele Tafoya let us know what players were doing to pass the time.

They were eating sandwiches.

While that may not sound particularly paramount, it led to an extremely important discussion. Per Tafoya, many of the players were upset with the peanut butter-to-jelly ratio. She said players told her that it was “like 70-30 with the jelly.”

Al Michaels took the PB&J debate back to the studio and ran with it. He asked Mike Tirico what he thinks is the proper peanut butter-to-jelly ratio.

Tirico, who has a nut allergy, said he wouldn’t know and deferred the question to Tony Dungy and Drew Brees. The two then raised some important questions.

Brees raised question about the type of jelly — whether strawberry or grape — and asked how the sandwich is to be cut — whether square or rectangular. Dungy brought up the type of bread — white or whole wheat.

The scintillating PB&J discussion during the weather delay in KC pic.twitter.com/qROm0bOiQh

This is a very important debate that we need to have as a society. At what ratio of jelly and peanut butter does it reach perfection? How do different jellies and the type of bread factor into the equation?

Brees’ point about how it is cut may not matter for the ratio, but it is important when it comes to the perfect sandwich.

I have thought a lot about this and here is where I stand. My perfect PB&J sandwich is:

A triangle cut, using a 60:40 ratio in favor of peanut butter, with grape jelly and white bread.