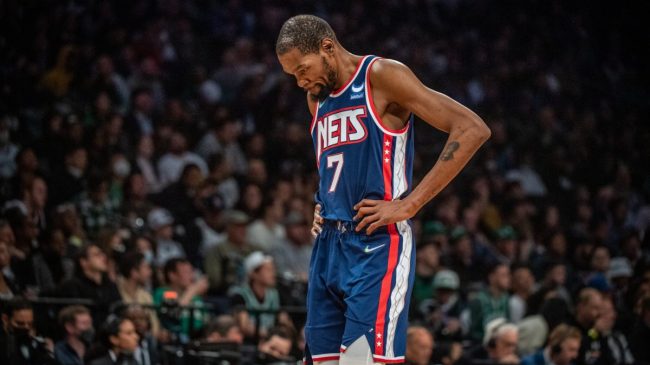 This has been an absolutely wild NBA offseason.

We had the Kyrie Irving debacle in Brooklyn, where he said that he wanted out only to sign his fourth-year player option to remain in New York. Teammate Kevin Durant then immediately requested to be traded from the Nets just as fans assumed the duo would return for 2022-23.

KD listed a few teams among his preferred destinations, with the Suns and Heat standing out. Immediately after those reports surfaced, the Suns became the betting favorite to land the 2023 NBA Championship.

The Suns have become the new title favorites for next season on @BetMGM.

Durant is one of the league’s top players. He averaged nearly 30 points a game last year with the Nets, helping the team reach the postseason. He’s one of the most elite scorers in the NBA and immediately improves any team’s lineup, which has clubs begging for the star to join their rosters.

This recent movement in Vegas has many NBA fans wondering if the sportsbooks already know something the public doesn’t.

With the Suns now becoming the NBA betting favorite, many are wondering if KD headed to Phoenix is a done deal.

just announce KD how hard can that be!

So, it's almost a certain thing that KD is going there, these betting mferes have been one step ahead all week https://t.co/rE8WAqaUND

Should KD head to the Suns, they would become an immediate title threat. Last year, Phoenix posted a league-best 64-18 record on their way to the top seed in the Western Conference.

Maybe Kevin Durant can get them over the hump.