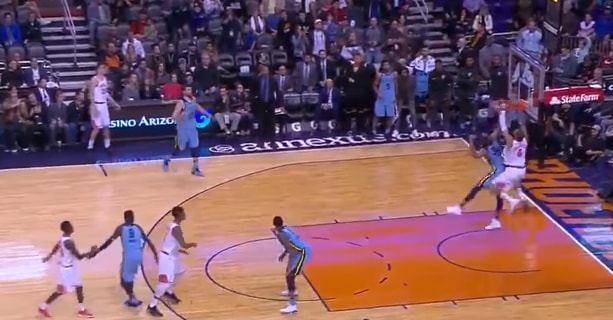 You don’t see game-winning alley-oops very often in the NBA, but it happened on Tuesday night when the Suns shocked the Memphis Grizzlies with this surprising play that gave Phoenix the last-second victory. The Suns utilized a little-known NBA rule that so obscure that the Grizzlies coach J.B. Bickerstaff and even Suns’ players had no idea that the play was even legal. The play is called “Rim” and it takes advantage of a quirky NBA rule that states that there can be no goaltending on an inbounds pass.

There were 0.6 seconds left in the game when Suns’ interim coach drew up the Rim play where Dragan Bender tossed the inbounds pass towards the rim and Suns’ center Tyson Chandler tipped it in. Even during the timeout, 17-year veteran Chandler asked his coach, “It’s not goaltending?” Memphis center Marc Gasol was contesting the inbounds pass, which left the smaller 6-foot-9 Brandan Wright on the 7-foot-1 Chandler. A perfect opportunity for the alley-oop play. Chandler tipped it in to give the Suns a 99-97 win. Officials checked the replay and deemed that Chandler touched the ball, thus making the play legal. It would have been illegal if Bender simply threw the ball into the basket.

Tyson Chandler slams it home to win the game for the @Suns!#SunsAt50 pic.twitter.com/8Ee7WqU6u7

“It’s a rule that a lot of people don’t know,” said Triano Jay Triano who had the play in his back pocket for about 15 years. Since plays can’t shoot the ball from out of bounds, that means it can only be a pass, and passes can’t be goaltended. Genius.

"I've tried to keep it a secret. It's not a secret anymore." — Jay Triano, who knew Tyson Chandler couldn't be called for goaltending on the decisive play. pic.twitter.com/l7N9setQ6a