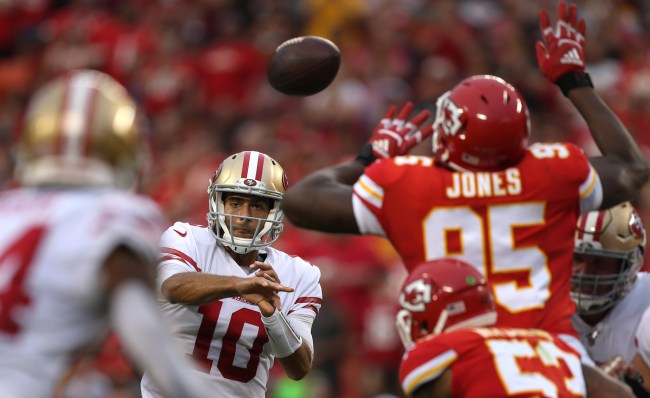 Some exceedingly large bets are starting to come in on Super Bowl LIV. One gambler reportedly put down almost $700,000 on the San Francsico 49ers plus the points, while another dropped $150,000 on the Kansas City Chiefs to win.

According to David Purdum of ESPN, one bettor has wagered a staggering $684,000 on the 49ers at plus-2 (-114) with DraftKings Sportsbook.

Meanwhile, according to Darren Rovell of The Action Network, another brave soul has put down a $150,000 bet at The Mirage on the Chiefs moneyline.

Super Bowl LIV started out at many sportsbooks as a pick ’em between San Francisco and Kansas City and has wavered somewhere between there and the Chiefs as two-point favorites, with a majority of the money seeming to come in early on K.C.

Currently, Oddschecker has the line sitting at the Chiefs minus-1.5. The moneyline currently ranges anywhere from minus-107 to minus-118 for the Chiefs and minus-103 to minus-110 for the 49ers.

Interestingly, both the 49ers and the Chiefs have performed well this season against the spread with San Francisco covering 66.7% of the time and Kansas City covering at a rate of 72.2%.

Both teams have also covered the over more than 50% of the time, which might explain why so many bettors are going hard on that prop for Super Bowl LIV.

Making the game even harder to bet on, the Chiefs have gone 12-3 when entering a game as the favorite, while the 49ers have gone 4-1 when listed as the underdog.

Might as well just flip a coin at this point and hope for the best it would seem.