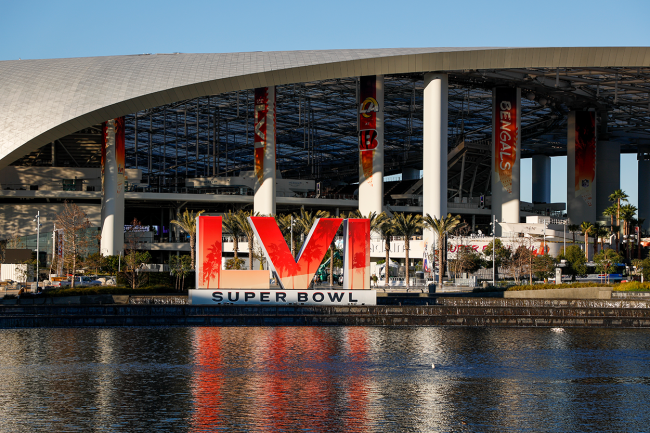 To attend Super Bowl LVI at SoFi Stadium is incredibly expensive. The cheapest ticket price leading up to the game sat around the $3,000 mark and that is only the beginning.

Once you get to the stadium, you’re going to want something to eat and drink, but the concession prices are extremely expensive. However, before it even gets to that point, you have to make your way to the game.

Most people would think to either Uber or take the metro. Other poor souls might choose to park.

That would be the wrong decision. To park anywhere near the stadium in Inglewood, California is going to cost a pretty penny.

Some parking passes on-site sold for over $4,200, including one at the nearby Hollywood Park Casino that was going for over $5,000. Fortunately, those were not the only options, but pre-paid passes still were not cheap.

Prepaid parking spots within 1.5 miles of SoFi Stadium are being sold online now too:

– $498.23 for a spot in the garage of a nearby medical center. pic.twitter.com/SfpXD8QCMy

Leading up to the game, it cost $225 for one spot that is a mile away from SoFi.

$225 for a parking spot. You might think we are right next to the stadium, but no, it’s a mile away. pic.twitter.com/75onAaBzFj

For those willing to pay a little bit more, $250 spots are in nearby driveways.

Parking @SuperBowl …. And this appears to be a good deal & a good spot close to Sofi Stadium. @nbcsandiego pic.twitter.com/kMWwdTBfMs

The cheaper options are also in driveways, but to be shuttled to the stadium costs extra, so it can’t be particularly close.

Some cheap Super Bowl parking kinda near the stadium. pic.twitter.com/AB3c5r8Y52

The cheapest option seems to be around $100, but the location is unclear.

We are blocks from @SoFiStadium and saw a sign $100 for parking. @SuperBowl @Bengals @RamsNFL @WLWT pic.twitter.com/sXlHWeeMCJ

GET YOUR MFN MONEY INGLEWOOD!!! pic.twitter.com/q5JaUV6W4p

Parking near SoFi stadium for the #SuperBowl is NUTS
A spot ranges from $100 to $400 @USATODAY pic.twitter.com/wHCZ7ScSux