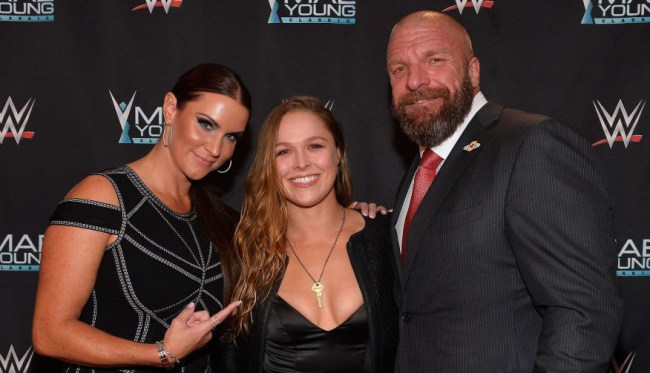 Many wrestling fans and even some of the WWE Superstars came away very impressed with Ronda Rousey after her in-ring debut at WrestleMania 34.

WWE Hall of Famer Superstar Billy Graham, however, was apparently not one of them.

Based on what Graham wrote on Facebook this week, saying he is not a fan of Ronda Rousey would be a tremendous understatement.

Graham, a 2004 inductee into the WWE Hall of Fame and the company’s Heavyweight Champion in 1977 and 1978, posted a photo of Rousey getting pummeled by Amanda Nunes inside the octagon, and began with, “Ronda Lousy vs HHH,” so you can see where it was heading. Strap in, it’s going to be a wild ride. (Forgive the bad grammar, syntax, punctuation, etc. This is what he wrote and how he wrote it.)

First off to the fan who wrote.. ” I find Ronda’s use of Piper’s gimmick nauseating ” You my brother are dead on my man !!!

I find it a total insult and absolutely reveals that she does not have an original thought in her head. Damn, can’t she be an original at anything ? This shows you how shallow she is and by the way, I am a fan of females being in the main event. That is why I put up this photo of Amanda Nunes kicking her ass in 48 seconds. She looked pitiful, a TKO in 48 seconds on Dec. 30th, 2016 by Nunes, a real fighter and Rousey just a jobber.

Speaking of jobbers, I read today a quote by Meltzer that shook me to the core, it goes as follows, ” There was a rumor going around by WWE officials prior to mania 34 that Rousey was going to make HHH tap out to her armbar finisher ( instead of Stephanie McMahon ) and it appears the company went in the latter direction specifically due to storyline continuity reasons; as Rousey attacked Stephanie’s arm the next night on Raw whereas HHH is not a regular on-screen character and has disappeared for now. ”

WHAT ??? Miss Lousy was going to make H tap out ??? This would have been received as well as a cement truck full of pig sh*t being dumped on the mania 34 fans. God folks, what is the WWE thinking ??? RR is not a god of some kind but a mere female x UFC failure that got her flat ass kicked twice on the way out. Now this is nauseating. I demand that you fans respond to this crap the WWE is trying to lay on you by even thinking about her making HHH tap out, god this makes me sick.

To help you get over your urge to vomit over this news, please click on the link directly below that my main man Mike found for me. Just a 60 second promo by me from Florida and please tell me if anyone in the WWE today can match my short promo, UN-scripted and loaded !!! Superstar B. G.

So I am guessing that Legends contract that Graham signed with the WWE back in November, 2015 must have elapsed, huh?

Yeeeeah… probably not the best time for Graham to be making headlines like this when it comes to wrestling, what with the passing of the legend Bruno Sammartino, the man who Graham won his belt from back on on April 30, 1977.

Now everyone get off his got-damn lawn!