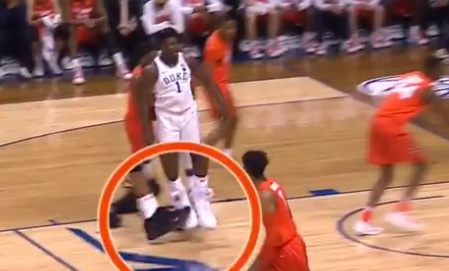 Zion Williamson returned tonight against Syracuse in his first game in nearly a month after he suffered a bizarre injury when his Nike sneakers exploded on the court.

Zion looked like his explosive self during the game by dunking all over the Syracuse Orangemen.

Early in the game, many Internet users noticed that Syracuse’s Frank Howard appeared to try to trip Zion after the Duke superstar ran up the court after a dunk.

Syracuse's Frank Howard appeared to attempt to trip Zion Williamson early in the first half. pic.twitter.com/aNUUebKMXH

The Internet was not happy with Howard and are calling for him to be suspended.

Frank Howard should be ejected. No place in the game for this. Refs will be addressing this come second half. Dirty and obvious. #Duke #ACCTournament pic.twitter.com/M2XVaDjAcp

This is sick, knowing the kid came back from injury… Frank Howard is a bum. Need that same energy you gave to Grayson @espn https://t.co/W9SLVGzTtb

I’m no Duke fan but how the hell has Frank Howard not been ejected from the game and banned for the rest of the college year? Just because the refs missed a DELIBERATE PREMEDITATED ATTEMPT TO INJURE A PLAYER JUST BACK FROM INJURY in real time doesn’t mean they can’t act NOW https://t.co/FAQzJx8Yql

Even ESPN’s Jay Williams went off on Howard during halftime and compared him to Grayson Allen.