Talladega is both a place and an idea. Drive on I-20 or any Interstate within a 100-mile radius of Talladega Superspeedway on a race weekend and you’re bound to see “Dega, baby!” written in white shoe polish on the back windshield of dozens of cars and trucks..

Like any sanctuary, Talladega is a place that transforms you. You leave slightly different from how you arrived.

There’s a reason why Eric Church has an anthem about the place that’s practically a hymn in the Southeast.

A raucous campground and infield packed with RVs and revelers ready to party. Hundreds of thousands of rowdy NASCAR fans ready for a good time. 2.6 miles of superspeedway speed and  33 degree bank turns, featuring cars with monster spoilers.

There isn’t a more breathtaking event in sports than lead changes with a couple laps left at 200+ MPH. It’s mayhem.

You don’t really have to know much about NASCAR history to (A. have a great time there with your friends and (B. understand how special the place is in motorsport history.

I’ve dreamed of a trip to ‘Dega for 20+ years, going back to when Dale Earnhardt dominated there in the ’90s. While the restrictor plate racing back in the day was great, something on TV just looked fun about hanging on top of a Winnebago in the infield for a race – usually shirtless – surrounded by all buddies in the Alabama sun.

I recently got a chance to cross off “trip to Talladega” on the bucket list, hot pass and all. I was there to root on Aric Almirola in the #10 car and his oh-so-close quest to bless racing fans with 1 million slices of free Smithfield bacon, resulting in a truly legendary weekend with the Stewart-Haas Smithfield Racing Team.

Smithfield, a leading provider of delicious, high-quality pork products, just re-upped their partnership with Aric and the No. 10 Ford Mustang.

“The Smithfield brand has enjoyed great success with Aric Almirola and Stewart-Haas Racing,” said Michael Merritt, Senior Marketing Director for Smithfield Foods. “It’s a true partnership that performs on the racetrack, with retailers and our consumers. Aric resonates well with them because he’s genuine and, overall, a great ambassador for the company. He has worked incredibly hard to get to where he is today and we’ve been a part of that journey for nearly a decade, and the payoff from all that hard work has been amplified by Stewart-Haas Racing.”

I can’t think of a better way to toast such an exciting moment for Smithfield and the Stewart-Haas team than a weekend at one of NASCAR’s most iconic tracks in a car with genuine bacon flames. 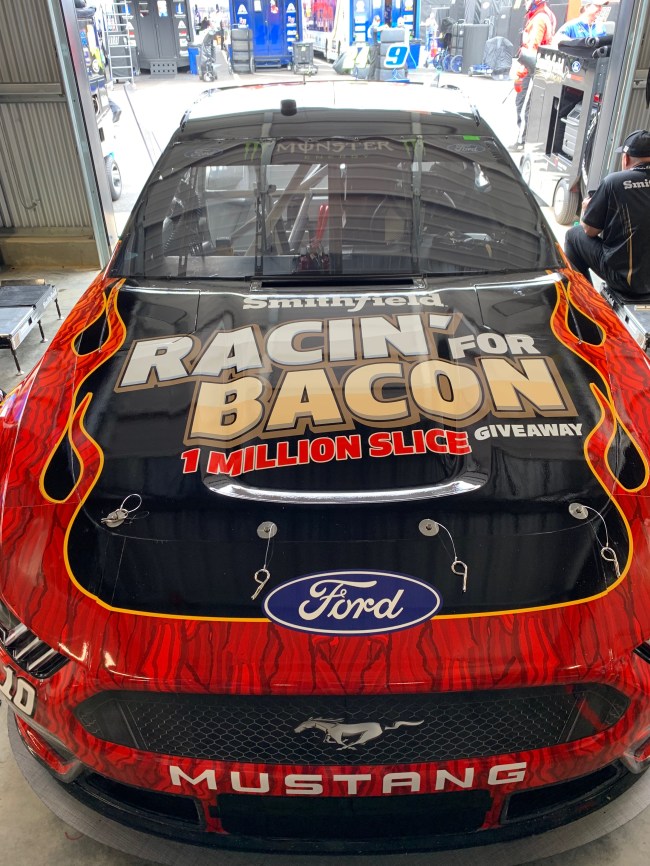 Now let me tell you about it.

Simply put: Talladega is, without a doubt, one of the craziest environments in all of sports.

If you’ve never been, race weekend at any NASCAR track is by-and-large a carnival for the senses. The sight of the brightly schemed cars, the smell of gas and burnt rubber, mixed with Smithfield bacon frying on portable stoves for breakfast in the campground.

There’s no such thing as “too weird” in the Talladega infield. There’s nothing in America quite like it. Specifically, Talladega Blvd, the self-proclaimed “party capital of NASCAR.” It’s a magical place where time seems to stand completely still. Talladega Blvd makes Bourbon Street look like a trip to Epcot Center. It’s four days straight of non-stop RV partying, from Thursday to Sunday (…and, this year, Monday).

Somehow, on the BLVD, the party is always going just as strong at 6AM as it is at 6PM. There’s live music. There’s grilled meats and delicious Southern BBQ wafting through the air in every direction. There’s moonshine. There’s no designated Quiet Time. Strangers get rowdy with fellow strangers as one big happy NASCAR party family. 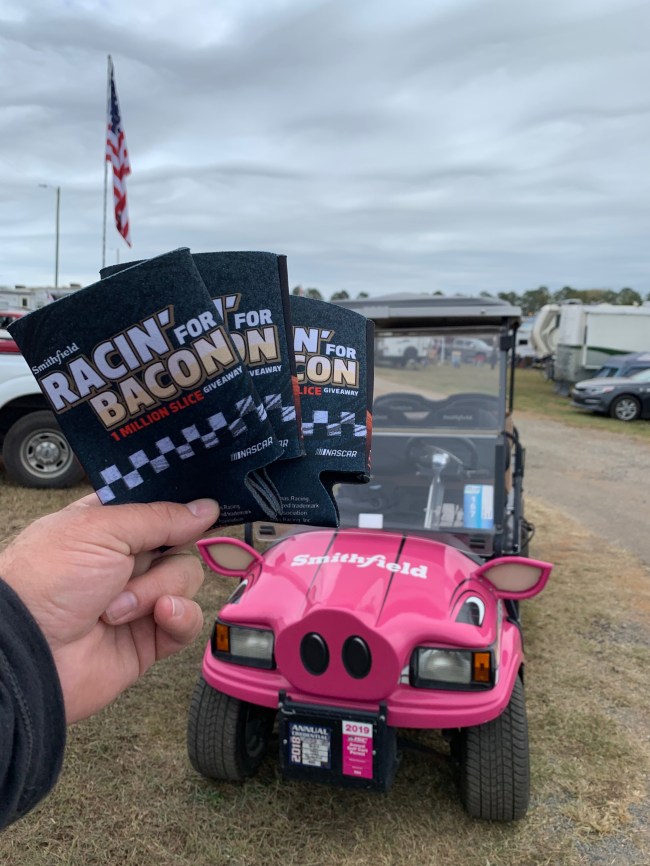 I got a chance to spend the weekend cruising around in the Smithfield pig golf cart (pictured above), giving out Smithfield Racin’ For Bacon 1 Million Slice Giveaway x Aric Almirola #10 car koozies to campers.

There’s no better place in the world to meet a smorgasbord of people from all walks of life, having the best time of their lives. Especially when you have something free to give ’em.

Your campsite has been blessed with the gift of koozies. pic.twitter.com/3SRDK3Olji

There’s even a Sunday morning parade of classic cars with monster spoilers.

Besides the campgrounds on the Talladega infield, ticketed race experience itself absolutely rules. Stacked with all kinds of delicious food and cheap beverages, (…including ‘Dega’s brand new signature Talla-Mento Dogwich – a hot dog sliced up on pimento cheese on Texas Toast… see below), the Talladega Garage Experience is a great way to get up-close and personal with the cars and watch the race.

Just look at this thing:

It’s Earnhardt country. Senior won at ‘Dega 10 times, including win #76 – his last win ever in breathtaking fashion in 2000. Jr won here six times. Bill Elliott once set a record here for fastest qualifying speed in all of NASCAR at 212.809 miles per hour. It’s where the term “The Big One” was coined by commentator Bob Jenkins during a huge pile up on lap 134 of the Winston 500 in 1998, dashing Mark Martin’s championship hopes.

Because it’s so hard to avoid total carnage and win here, the Cup Series drivers who win at ‘Dega are immortalized as the brightest shining stars in the sport, with the best teams and the fastest cars. Just look at any list of Cup race ‘Dega winners in the past two years: Ryan Blaney, Chase Elliot, Aric Almirola, Joey Logano.

You’re bound to run into a NASCAR legend at some point in the weekend.. 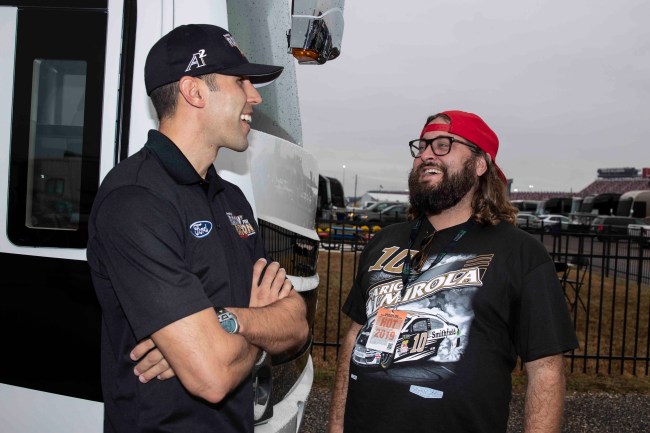 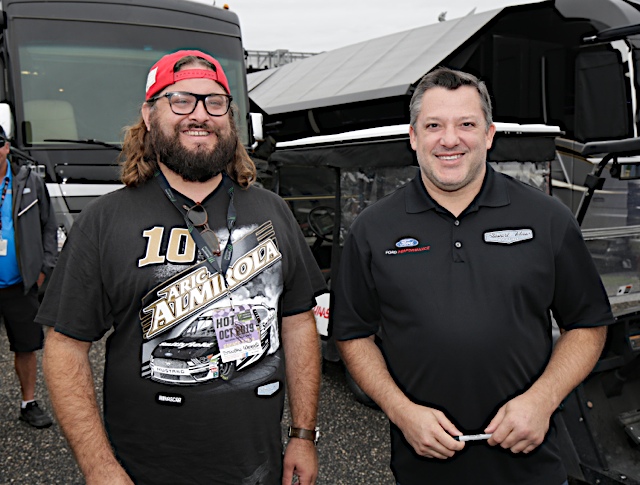 Yes, drivers, crews, and teams have a job to do just like they do any weekend. But most of these guys have been coming to ‘Dega twice a year for 25+ years. It’s a home away from home – they might not be there to get after it with you, but all you have to do is keep your head on a swivel and you never know what NASCAR legend you’ll trip into.

Can’t say I’m ever surprised to meet a NASCAR legend at a NASCAR track anywhere, but it sure was a trip running into Smoke himself – Mr. Tony Stewart – before the green flag on Sunday.

Just shows you that NASCAR drivers really are the salt of the earth when it comes to engaging with dorky fanboys like myself. Another reason why NASCAR remains the best – the superstars of the sport are approachable and engaging, especially compared to pro athletes in other environments.

And finally, the glue that brings everyone together: The racing itself.

The cars get all dolled up in their Sunday finest, with teams and sponsors like Smithfield putting on their very best for one of the greatest spectacles in sports.

Don’t forget to enter to win your share of ONE MILLION slices of bacon 🥓 if Aric wins at Talladega tomorrow! https://t.co/pzuV2pf85m #sp pic.twitter.com/sRnoeTwK8i

If the Daytona 500 is NASCAR’s Super Bowl, Talladega is AT LEAST NASCAR’s Kentucky Derby. It’s a 188-lap soap opera at 200 MPH, with teams bringing their very best to complete for the checkered flags.

As a fan, it’s impossible to not watch this race with sweaty palms and an elevated heart-rate. TV doesn’t do it justice: just like at Daytona, the way these drivers draft each other within inches on a superspeedway has to be seen to be believed.

As does the drama. For example, in Stage Three of this year’s race after the rain-delay restart on Monday, Alex Bowman threw Joey Logano a block, causing Bowman to go sideways in-front of the pack. Then William Byron veered into Joey Logano to further clear the pack, causing Logano to get scarily close to a barrel roll.

And then there’s Brendan Gaughan’s WILD flip in the last laps of the race, clearing the field and causing a restart.

There’s not a more heart-stopping moment in all of sports.

And as they say in the NASCAR world, “that’s just ‘Dega baby.”

The checkered flag at Dega this past year will go down in my book as one of the most exhilarating endings to a NASCAR race I’ve ever experienced.

My guy Aric Almirola restarted in second with two laps to go, battling it out against Ryan Newman, Denny Hamlin, and Ryan Blaney, who earned his third career trip to Victory Lane on a Monday in October.

It’s Monday and we’re RACING FOR BACON 🥓 at @TalladegaSuperS! Let’s gooo to @Aric_Almirola and the @SmithfieldBrand #10 car.

Reminder: Smithfield is gonna give away ONE MILLION slices of bacon 🥓 if Aric wins at ‘Dega today. 🏁

All-in-all, the October Talladega 2019 Cup race went down as the 7th true photo-finish of all time – a historic moment for anyone who loves the roar of Cup cars at full throttle, whether you were there to witness in person or not.

Big thanks to the folks at Smithfield for having me. They’re a gracious, awesome bunch, fueled by the delicious magic of bacon. Just look for them in the piggy golf carts at your next NASCAR race and holler at them.