WATCH: This Tampa Bay Buccaneers Security Guard GOT DOWN To A DMX Cheer Routine 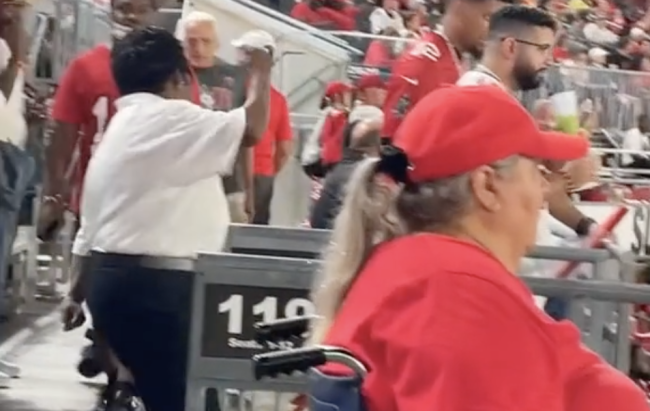 When DMX comes on, it’s time to get down. At least, that was the case for a Raymond James Stadium employee on Saturday.

TikTok user Chelsea Bear (@realchelseabear) shared the amazing moment and it will bring a big smile to your face.

Per the caption, Chelsea’s sister is Bucs cheerleader Chloe Bear. She is a second-year cheerleader and was with the team during its Super Bowl run.

After making the team again in 2021, Chloe is back on the sidelines. The team made its debut on Saturday for the first preseason game of the season. Tampa hosted Cincinnati and ended up losing but the highlight came from the stands.

Early in the first half, Chelsea told a nearby security guard that her sister was a cheerleader. What happened next was amazing.

As the late DMX’s ‘Party Up’ began to play over the loudspeakers, the cheerleaders broke out into their routine. Joining them from the stands was the security guard. She went absolutely buck wild.

i aspire to live on this level #waitforit #tampabaybuccaneers

The security guard has not been identified, but she is absolute joy with some serious moves. From head-banging to hip-swiveling, to two-stepping, she’s got it all and she isn’t afraid to get after it.

Even the Tampa Bay Buccaneers official account got in on the love and commented “We absolutely love to see it” with a heart emoji. If somebody in the front office was smart, they would get the security guard on the field during halftime and let her live her best life!