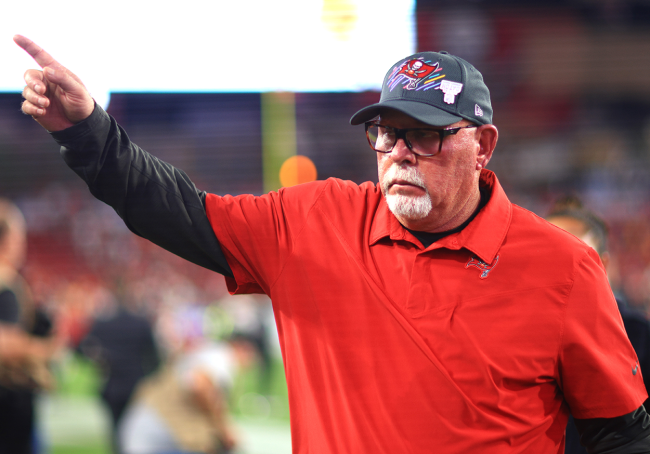 Tampa Bay wide receiver Antonio Brown did not practice on Friday due to an ankle injury. However, that was the least of concerns in terms of the 33-year-old’s status.

Earlier this week, Brown was accused of obtaining a fake COVID-19 vaccine card to avoid the NFL’s health and safety protocols. Additionally, reports began to circulate that he was also offering to provide other NFL players with fake cards.

In response, Brown and his camp were quick to deny any such allegations. His attorney even went so far as to say that Brown would be willing to get the COVID-19 booster shot live on TV, if necessary, to prove that he is vaccinated.

While that would be tremendously bizarre and fairly entertaining television, Buccaneers head coach Bruce Arians appears confident that it will not get to that point. He spoke with media on Friday about the matter.

In the press conference, Arians said that he has no reason to believe the reports.

“None whatsoever,” he said, going on to share that the team did its due diligence and that he expects the NFL to do the same. He also made it clear that Brown’s statement says it all.

Here is what he had to say on the matter:

I asked Bruce Arians if he had any reason to believe Antonio Brown produced a fake vaccine card. “None whatsoever. We did our due diligence. The league will do theirs. The statement says everything. I really don’t think it’s a story and it has nothing to do with the Giants game.” pic.twitter.com/qqgY1C0uEd

Based on both Brown and Arians’ comments, it seems as though there is a high probability that this story does not carry water and that it is time to move on. However, if this story were to come out as truth, it would be one of the biggest stories in NFL history, as Brown’s fake vaccine card would be a criminal offense.