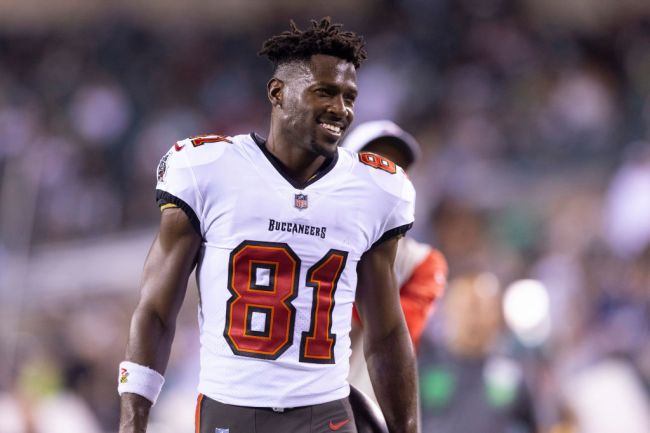 Antonio Brown is fighting back on claims that he’s unvaccinated.

On Thursday afternoon, the Tampa Bay Times reported that Brown was being accused of obtaining a fake vaccine card by his former personal chef.

Bucs receiver Antonio Brown obtained a fake COVID-19 vaccination card so he could avoid NFL protocols, according to his former live-in chef.

Brown’s girlfriend, model Cydney Moreau, told Los Angeles chef Steven Ruiz in a text message July 2 that Brown was willing to pay $500 if he could get a Johnson & Johnson vaccination card.

Ruiz said he was unable back in July to find a fake vaccination card for Brown, who had told those around him that he was worried about the vaccine’s potential negative effects on his body.

A few weeks later, however, Ruiz said Brown showed him fake vaccination cards, which the wide receiver told Ruiz he had purchased for himself and Moreau. They were sitting on Brown’s dining room table, Ruiz said. It was just days before the start of Bucs training camp.

Brown’s attorney has denied the chef’s claims and says Brown is willing to get a booster shot on live TV to prove that he’s vaccinated.

Antonio Brown's attorney Sean Burstyn, told me Brown is vaccinated and, “If Antonio’s doctors and the guidelines require a booster shot, then at that time, he’ll be happy to do it live on TV and everyone can come watch.”

The NFL has told reporters that they are aware of the allegations made against Brown and will “review the matter.”

NFL league spokesperson Brian McCarthy told me the league is aware of the report regarding Antonio Brown and a fake vaccine card, and they “will review the matter.”