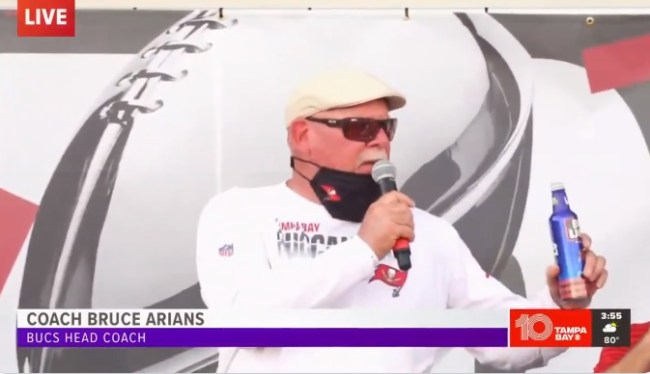 Bruce Arians’ speech at the Bucs Super Bowl parade was too hot for TV.

On Wednesday afternoon, a Tampa TV station was forced to cut away from Arians’ speech because he started cursing up a storm on live TV.

Bruce Arians: Anybody who says, "Run it back." Bullshit. That was Kansas City's bullshit. We going for two. We ain't stopping. We're going to keep this band together.

I cannot take credit for any of this. We have the best coaching staff, and we damn sure have the best players in the NFL. Anybody that says run it back, that’s bullshit, that’s Kansas City’s bullshit.

I can’t thank the players, the families enough for all the support for this crazy ass year. You beat Covid and every damn team we lined up against.

And you did the right way, oh shit. Vita I’m going to kick your ass.

Here’s the rest of the Arians’ speech that wasn’t shown on TV.

Lavonte David is scheduled to be a free agent. "I want to be back."