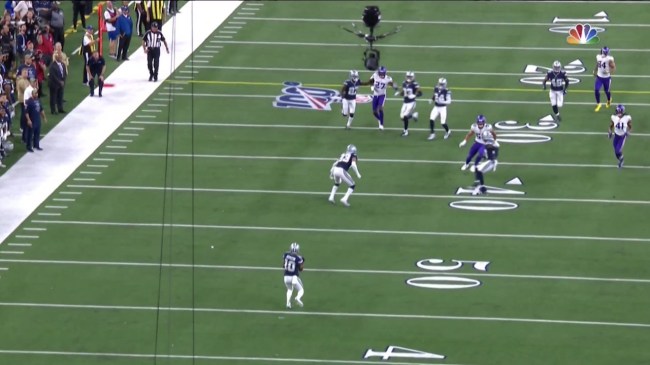 Once again, the Dallas Cowboys are currently in the midst of another wildly average season, as they currently sit at 5-4.

Luckily for the Cowboys, though, because the NFC East is such a disaster, they still somehow remain atop the division.

Yet, despite the fact that the Cowboys are in first place, the vultures are beginning to (once again) circle around Jason Garrett’s head, especially when he does ridiculous things like this.

Down four points to the Minnesota Vikings with left than 30 seconds left to play, the Dallas Cowboys coaching staff sent out their punt return team and ordered returner Tavon Austin to call a fair catch to give the offense a couple of hail mary shots.

So, Austin followed the instructions of his coaching staff. The only problem is, the instructions couldn’t have been worse, as Austin had what amounts to acres of daylight (especially in the NFL) in front of him.

Tavon Austin was told to fair catch this……… pic.twitter.com/JJ2wRgzYti

Poor coaching. Tavon should've been instructed to run if he had room.

The coaching staff telling Tavon Austin to fair catch that punt still has me speechless.

Another reason why the Clapper should be fired: telling Tavon Austin to fair catch the punt with 17 seconds left. He had so much room on the sidelines to run the ball!!! Gotta break the rules sometimes.

Could’ve possibly had vintage West Virginia Tavon Austin but the coaching staff told him to call a fair catch. pic.twitter.com/HpKpbVrEep

The Tavon Austin fair catch is a small example of why this team isn’t Super Bowl caliber. It’s written deep into their DNA to take the safe option rather than the aggressive one

“They won’t have their gunners out wide, Tavon, but still, don’t waste any time on a return. OK now, Dak, after Tavon calls a fair catch to save as much time as possible, I want you throw it 3x to the sideline to the backup TE, and then try a highly improbable Hail Mary.” pic.twitter.com/59qSDXWsiH

Dak Prescott and the Dallas Cowboys likely march to the sixth seed in the NFC playoffs marches forward next week as they head to Detroit to take on the Lions.

That said, if I’m a Dallas Cowboys fan, the last thing I want is the team making a run to the playoffs, as it will likely lead to yet another season of mediocrity under head coach Jason Garrett.