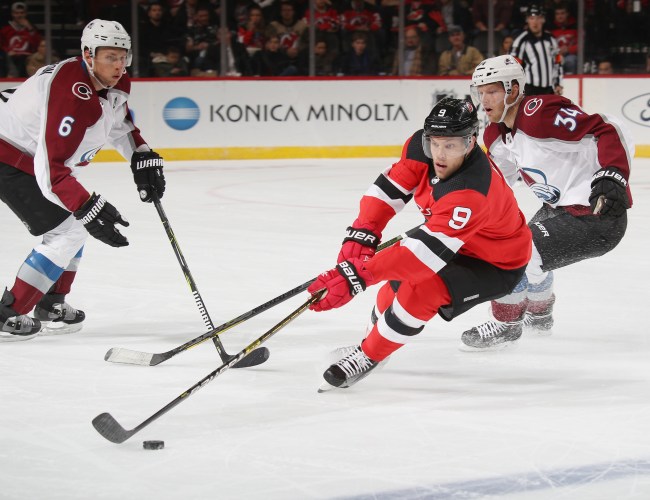 Left Winger Taylor Hall was selected as the #1 overall pick in the 2010 NHL Draft by the Edmonton Oilers, a team he played with until he was traded to the New Jersey Devils in 2016. Last season, Hall became the first Devils player in franchise history to win the Hart Memorial Trophy, the NHL‘s version of the MVP award.

The 26-year-old is an absolute stud on the ice. Last season he recorded 93 points in 76 games played (39 goals, 54 assists). He led the New Jersey Devils to the Stanley Cup Playoffs where they lost in the first round to the Tampa Bay Lightning in a 1-4 series, a series I was fortunate enough to catch 3 of the 5 games in person (go Bolts).

This will be Taylor Hall’s ninth year in the NHL. His days of being a rookie teenager are long gone. He’s older, his body is aging in ways that cause him to pay attention to his diet and recovery in ways he didn’t have to a few years ago.

Taylor recently sat down for an interview with Christopher Cason of GQ Magazine where he discussed his day-to-day diet during the season and the ways in which he keeps his body fresh, like his elaborate stretching routine. Going into his ninth season, Taylor says he hasn’t really had to tweak his diet much yet.

I’ve never really had to mess around with my diet—I never felt like any type of food really gave me a huge advantage. That said, my diet is heavy on carbs and protein, and I try and eat as many vegetables as possible. I stay away from fruit, and I’m not a big sweet-tooth guy. I don’t really like chocolate or ice cream. If I’m going to cheat, it’s going to be a cheeseburger or a slice of pizza.

As you play more and get older, your metabolism can slow down a bit, but mine is still pretty good. I find that if I don’t eat as much, I get low on energy. So for me, after I exercise, it’s about getting as many carbs and proteins in me as possible, and having carbs throughout the day to make sure my energy level stays high. If I do that, usually I feel pretty good. (via)

So what exactly does the NHL’s 2017-2018 MVP eat on a day-to-day basis in order to keep up with the rigorous schedule of playing a game every 1-3 days throughout the season? He prefers salmon over chicken.

In the morning, it’s pretty simple: I have eggs with oatmeal and sausages. I try and mix in a green juice with breakfast as well. From there, my pre-game meal is gluten-free pasta. I’ll have some meat sauce with it, and salmon. I really love salmon because it has a lot of protein, and my body always seems to digest it really well. I like it a lot more than chicken because I feel like it has more flavor.
I’ll go home and take my nap and then have a snack when I wake up. Usually, that’s some rice and salmon again, this time with broccoli. I’ll have another green juice as well. When I get to the game, it’s all about getting electrolytes in me and making sure I’m hydrated. There’s a drink called Catalyte and another called Amino Complex—I mix those together, and I have that for about four to five hours during the lead-up to the game, and more during the game. I find that fuels me pretty well. (via)

When it comes to stretching an recovery, Taylor’s big on hydration. For postgame recovery, he believes that getting some quick calories into his body and hydrating as much as possible are the most important things he can do. As for his famed elaborate stretching routine, he tried to downplay it some in the interview.

I wouldn’t call it elaborate. I like to warm up pretty well. I wouldn’t say it’s any different from a lot of other guys, though. I’m just trying to get my body loose and warm. Besides, we have 82 games a year, so it’s hard to warm up super hard before every game. I find that if you do that, you get a little too tired. (via)

In the offseason, Taylor said he’ll take a few weeks and eat more burgers and pizza than he normally would but that he tries to stay consistent with his diet because he likes to eat well in general. He lives in Toronto, a city with a ton of great restaurant options, so he tries to keep it pretty steady throughout the year.

You can check out his full interview on GQ Magazine‘s website where Taylor Hall talks about his goals for this season, his goals in the offseason after winning the MVP, and more.