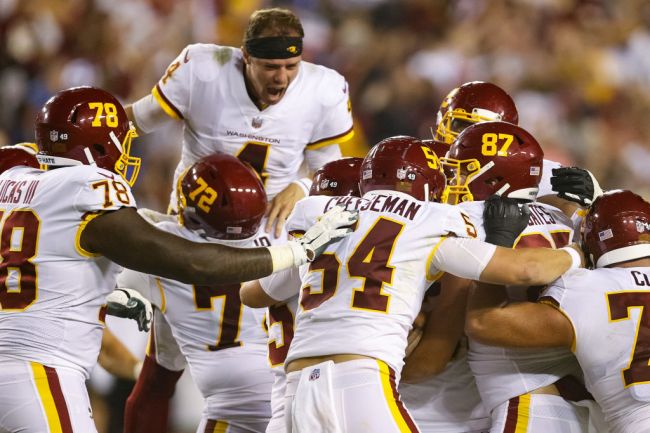 Dustin Hopkins’ game-winning field goal on Thursday night against the Giants was big for a lot of reasons. Not only did it keep the Football Team from starting the season 0-2, but it made quarterback Taylor Heinicke a lot of money.

Per ESPN’s Field Yates, the walk-off three-pointer triggered an incentive clause in Heinicke’s contract that. The kick, and ultimately the win, saw the 28-year-old cult hero pocket a cool $125,000.

Not only did Dustin Hopkins give Washington the win with his field goal, he gave QB Taylor Heinicke a nice payday.

By playing in over 60% of the snaps and Washington getting a win, Heinicke earned a $125,000 incentive.

Heinicke, who signed a two-year contract with Washington during the offseason (including a $1,000,000 signing bonus), could see that kind of money more than once this season. In fact, he could see it up to 12 times.

Ultimately, Heinicke got lucky on Thursday. The Giants were flagged for an offsides penalty that allowed Hopkins a second opportunity to win the game. After missing from 48, Hopkins hit from 43.

However, upon further review, the player who was called offsides did not appear to be offsides. The Giants are extremely frustrated with the call after reviewing the film.

The NFL has since released a statement that says it believes that the call was correct, and backed the offsides penalty.

Either way, whether right or wrong, the second-effort kick was good and the result is final. As such, no matter what the NFL ends up saying about the decision, the Washington Football Team is 1-1.