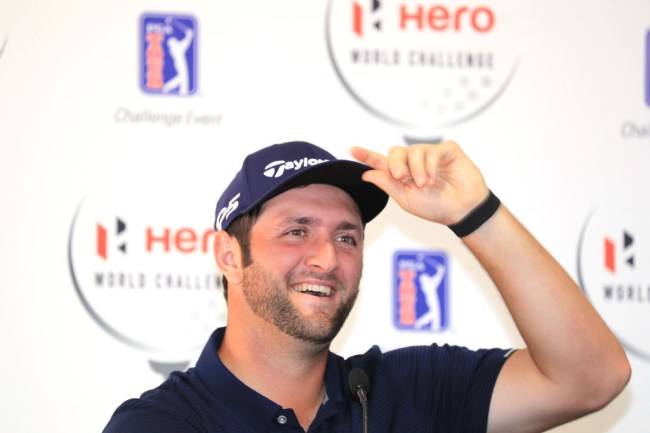 Taylormade Golf put out a Christmas card featuring some of the game’s best players that happen to be signed with the company.

The card features the likes of Tiger Woods, Rory McIlroy, Jason Day, Dustin Johnson, Matthew Wolff, Collin Morikawa and last, but certainly not least, Jon Rahm all rocking onesies. While nobody in the photo looks completely comfortable, Rahm and his pose easily take the cake for most awkward.

I’m sure it was maybe a bit easier to get the younger guys like Wolff and Morikawa into onesies and pose for photos, but the fact they got DJ, Woods, Rory, Day and Rahm into these things deserves a round of applause.

I’m going to go out on a limb here and say one thing we weren’t going to see in this photo was the owner of 15 major championships Mr. Woods sitting on the floor holding some sort of makeshift club, but McIlroy pulled off the pose pretty well.

Taylormade confirmed with us that all of the players were together for this photo, it wasn’t photoshopped, which makes the photo even funnier. I can’t imagine the kind of chirping and jokes that were being passed around at one another when they all finally got in the room together wearing these onesies.

I assume the placement for some of the players went a little something like this:

‘Alright Jon, we need you over at that tree acting like you’re putting an ornament on the tree and we want that side-angle shot, my friend.’

‘Wolff, you just go over there and pose like you’ve probably done in family photos in years past, we’ll be sure to get a good look at that facial hair.’

‘And Tiger, well, you can do whatever the hell you want, sir.’