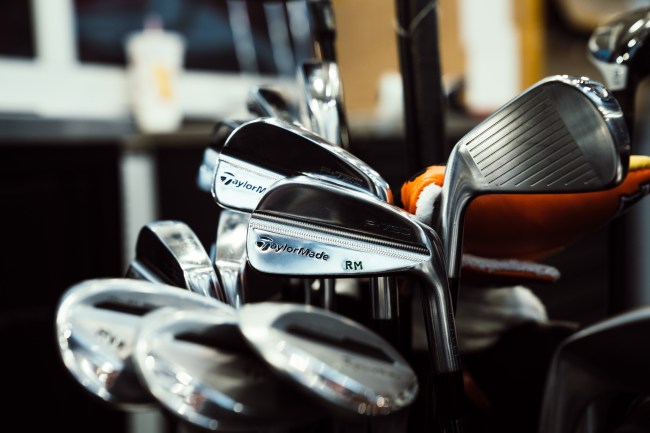 I got to travel to Carlsbad, Calif. with TaylorMade during Farmers Insurance Open Week for a really cool, eye-opening behind the scenes experience.

From checking out TaylorMade’s new SIM line of woods, getting a look inside TaylorMade HQ and The Kingdom to talking with Matthew Wolff inside TaylordMade’s two-story tour truck at Torrey Pines, I saw a lot of interesting stuff.

TaylorMade HQ and The Kingdom

We first got a behind the scenes look inside the TaylorMade offices at their headquarters in Carlsbad. First and foremost, we all know there is a lot of science and physics involved when it comes to golf clubs and golf balls, but hearing from some of the people actually behind these products was eye-opening. Let’s just say people that are much smarter than you and I are doing big-time scientific things creating the next best product.

When learning more about the new SIM driver and fairways woods, we learned that in the industry you don’t call drivers ‘hot’ when they jump off the face and add a few yards off the tee, instead, you call those drivers ‘spicey.’ So, all you weekend warriors, start using that term, it’s better anyway.

I can’t talk too much about specifics going on at HQ regarding products and what all they have going on, but trust me when I say they are doing some very in-depth, impressive work inside that building.

The Kingdom is located just across the street from headquarters and this is where it really gets fun, especially for those like myself that can’t keep up with big scientific words involving the science behind these products.

The Kingdom really is a special place. In my opinion, what makes it so special is that it’s not overwhelming. It’s not some huge, flashy spot. It’s a quiet haven for players to tune-up their game and equipment, that’s it, full stop. At the end of the day, that’s what the likes of Rory McIlroy, Tiger Woods, Dustin Johnson, and other TaylorMade professionals are after when it comes to precisely getting their equipment and games in order.

Related: We Talked With Matthew Wolff About His Relationship With TaylorMade That Goes Back To When He Was 12, His Unique Swing And More

Yes, it has all the bells and whistles imaginable as Tom Kroll, director of The Kingdom showed us. From 3D swing technology, the world-class driving range, a mind-blowing putting lab, and more clubs you can count, you can certainly get your game set here.

McIlroy was there a couple of days before we were there getting tuned up while rocking some joggers.

If you would’ve told me “one day, you’ll have the opportunity to capture content for one of the world’s best golfers, at a private elite facility.” — I would’ve told you you were crazy. Well, yesterday, it became a reality. World Ranked #2, @rorymcilroy stopped by The Kingdom at @taylormadegolf to do a last-minute tune-up before teeing it up this week at the @farmersinsopen at @torreypinesgolf. | #TeamTaylorMade #HearTheRors #RoryMcIlroy @TaylorMadeGolf #SeeYouAtTorrey

Anyone can experience a club-fitting here, too. It does cost $650 and you have to book through a local staff professional, but it is an option for any golfer.

After checking out where some of the clubs are made at HQ we got to go inside the two-story tour truck at Torrey Pines where the clubs are finely tuned to each player’s specific specs and liking.

This is where the magic really happens, on a truck that travels to nearly every PGA Tour stop making sure TaylorMade athletes are getting the most out of their equipment.

To say this place was a fine-tuned machine would be an understatement. Imagine world-class sushi chefs working in the middle of the dinner rush on a Friday night, only these guys are running around grinding, bending and tuning pieces of metal to specific specs.

While it may look hectic to those getting a first glance inside, club builder Wade Liles and the rest of the TaylorMade team are as cool as cucumbers. Liles, who’s been driving the TaylorMade truck since 2000, showed off some of the new SIM toys on the truck.

The @taylormadegolf Tour truck has alllllll the goodies!

From irons, shafts, grips and crazy machines that make these clubs right for the TaylorMade professionals out there, this truck had it all.

As Liles was showing us some of the final things we had yet to see on the truck his phone rang. He said ‘oh, that’s probably Tiger calling.’ All of us there half-laughed thinking he was messing with us, but he wasn’t, it was Woods calling. Tiger needed something, so it was time for us to step out of the workspace.

A special thanks to TaylorMade for the great hospitality and experience at TaylorMade HQ and The Kingdom in Carlsbad as well as on-site at Torrey Pines.