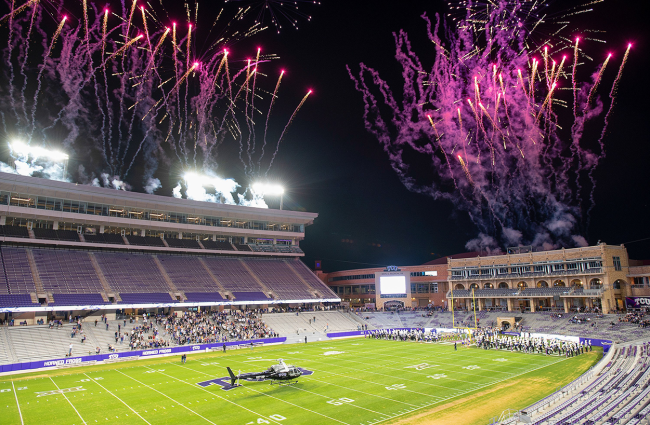 There is an absurd amount of money in college football and it often makes for some wildly entertaining, extremely unnecessary events that we, as fans, often take for granted. Take last night’s new head coach introduction at TCU for example.

The Horned Frogs recently hired Sonny Dykes to take over for Gary Patterson, who was fired after more than two decades. Dykes most recently served as the head coach at SMU, and has previously held the same role at Cal-Berkeley and Louisiana Tech.

To say that he is a big-name hire would be neither true nor inaccurate. He is a good hire for a middle-tier Power Five conference program. Nothing particularly flashy, like hiring Lincoln Riley or something.

As such, introducing him in front of a crowd in the university’s basketball arena would have sufficed. Even just a press conference might have done the trick.

Instead of just having him make a speech in front of a small crowd or the media, the Horned Frogs athletic department went big. It’s college football in Texas and the first head coaching hire in more than 21 years, so apparently they felt obligated to roll out the red carpet.

To do so, Dykes was introduced in front of a sizable crowd at the football stadium. But he didn’t just walk in and make a speech.

Instead, Dykes was flown in with his family and the athletic director on a helicopter that landed at midfield.

The ceremony ended up being pretty incredible in terms of visuals.

Complete with fireworks and the marching band, TCU really spared no expense.

All in front of a fairly insubstantial crowd. Although things emptied out quickly, barely anyone was there as the ceremony came to a close…

Here is a recap of the entire event, it really was as extra as it possibly could be:

You do you, TCU. Good luck with Dykes!