TCU Is Getting Fried By Locals For Hiring Kendal Briles 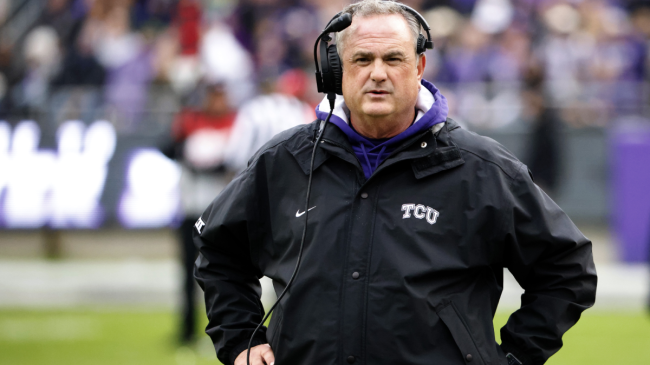 It was a dream 2022 season for the TCU Horned Frogs. They went from unranked to the national championship game under first-year head coach Sonny Dykes.

Of course, it ended in complete disaster. TCU lost to Georgia in embarrassing fashion, 65-7, in the national title game.

The program also lost its offensive coordinator, Garrett Riley, to Clemson. That’s a big loss, as the brother of USC coach Lincoln Riley is thought to be one of the best young minds in the game.

So, Dykes had to find a new coach, and he found one in Arkansas offensive coordinator Kendal Briles.

he’s the son of former Baylor coach Art Briles, who oversaw one of the most disgraceful scandals in sports history at Baylor. Dozens of women were allegedly sexually assaulted by members of the football team over a period of time, including some when Briles was in charge. Some of those happened under Art Briles. And, Kendal was there at the time, though his involvement in the alleged cover-ups is disputed.

But, one TCU fan has had enough and wrote a scathing letter to the editor that has now gone viral.

The scathing piece read, in part:

After a season for the history books, with the eyes of the nation firmly upon the little private school from Fort Worth, TCU leadership made the decision to hire Kendal Briles, a coach with a history entrenched in one of the worst, most horrific systemic failures at a university in our lifetimes: the sexual assaults at Baylor. (Jan. 20, 1B, “Four things to know about TCU’s new OC Briles”) Because we just have to win. And regardless of the blatant disregard for the lifetimes’ worth of damage for the young women who were victims at Baylor or the “potential” of this hire for the program, the message is loud and clear — to the victims, to the Horned Frog faithful and to the women in the TCU community: we just have to win. Nothing else matters.