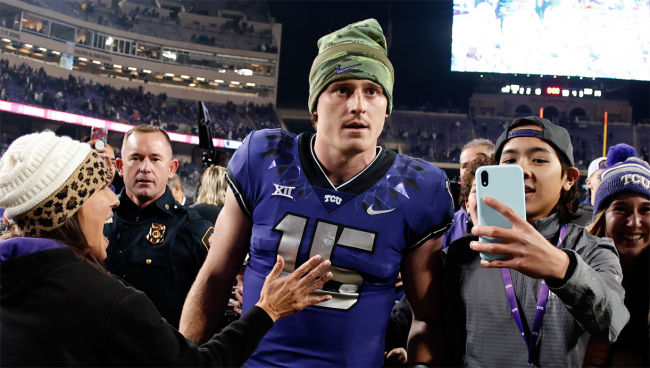 TCU fell in a overtime heartbreaker 31-28 to Kansas State in the Big 12 Championship Game, putting an end to the one-time Iowa Gatorade High School Player of the Year’s regular season.

How can you not root for Max Duggan? pic.twitter.com/KI3DJNSX4w

Now the Big 12 Offensive Player of the Year, Johnny Unitas Golden Arm Award Winner and finalist for the Heisman Trophy has to just sit and wait several weeks for redemption. Luckily, the Horned Frogs’ ranking stayed the same after the loss (3) and will next take on Michigan in the CFP Semifinal at the Fiesta Bowl on Dec. 31.

In the meantime, Duggan, who passed for 30 touchdowns with just 4 interceptions this year (with one coming in the Big 12 Championship Game), can busy himself with all the lovely ladies who are so smitten with him on campus.

One such female who thinks Max Duggan is the bees’ knees went viral this week when her TikTok video hit the College Football sub-Reddit Twitter account.

In the video, which was also shared to TCU football’s TikTok page and has been watched over half a million times, a female TCU student falls to the ground thinking about “any time Max Duggan licks his fingers before the play.”

While that alone would be entertaining enough, the real kicker to the video is the fact that after playing it the video jumps to Max Duggan himself actually watching it.

The look on his face is priceless. As is the fact that when someone asks him to lick his fingers (“give us one, right now”) he is game enough to oblige.

After watching the video, as was the case when he laid it all out there both during and after the Big 12 Championship Game, college football fans love them some Max Duggan.

“The Rizz is crazy with Duggan,” someone else tweeted.

“Bro has that dawg in him,” another fan wrote on TikTok.

“He’s memorizing that username,” joked another.

Dude i know! There is always that one guy in the group that just HAS to bring up the obvious when we turn red lol