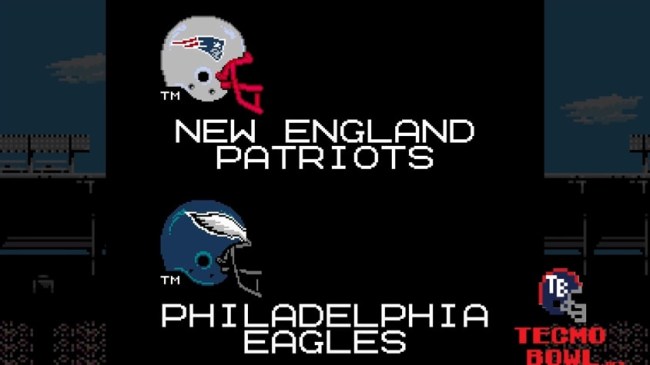 Everyone is already spouting their predictions on who will win Super Bowl 52 including Tecmo Bowl. The original NFL video game that debuted way back in 1989 on the NES, ran a simulation of what will happen in Super Bowl LII. According to this CPU vs. CPU simulation, the New England Patriots will fall to the Philadelphia Eagles in the big game after they fail to make another Super Bowl comeback. If only the Pats had Bo Jackson.

According to the sim, the Eagles will strike first thanks to a 60-yard play when Nick Foles connected with running back Jay Ajayi. Then Ajayi sneaks in for a touchdown on the next play to give the Eagles a 7-0 lead. Offensive lineman Lane Johnson scores another TD for the Eagles after recovering a fumble and rampaging into the end zone. The Patriots force another fumble, this time Foles coughs it up and New England cornerback Eric Rowe takes it to the house to put the Pats on the scoreboard.

The Eagles force the Patriots to settle for a field goal after New England marched down the field. Eagles’ defensive tackle Fletcher Cox sacks Tom Brady in the end zone for a safety. With 11 seconds left in the game, Brady looked to complete another inconceivable Super Bowl comeback but needed 33 yards to score a game-winning touchdown. Brady’s last-ditch pass was broken up and the Eagles win Super Bowl 52 by the score of 16-10.

The Tecmo Bowl simulation for Super Bowl 49 predicted a 24-14 win by the Patriots over the Seahawks, and it was pretty close with the actual score being New England 28, Seattle 24. For Super Bowl 50, Tecmo Bowl incorrectly declared that the Panthers would beat the Broncos by the score of 17-7, but the actual result was Denver beating Carolina 24-10. Last year, Tecmo Bowl correctly predicted that the Pats would beat the Falcons by the score of 35-21, and the real score was 34-28 in favor of New England thanks to their incredible comeback.