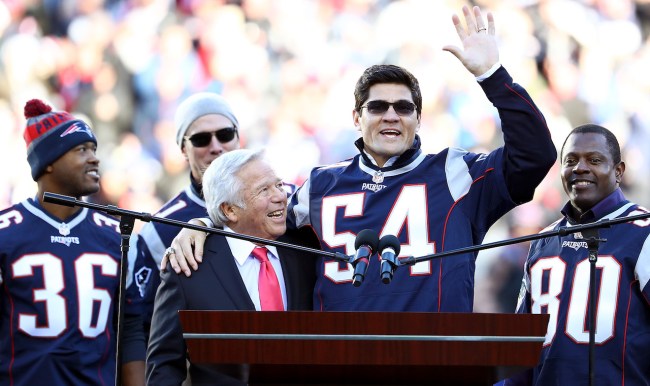 And that’s totally fine. If my favorite football team were the professional sporting equivalent of the Sith Empire, I’d ride or die with them too. And if you’re a former player for the franchise, I can only image how blinded you’ve been by their evil-doing ways.

Bruschi — the 46-year-old ESPN NFL analyst who played linebacker for the Patriots from 1996 to 2008 — appeared on NFL Live on Monday and absolutely ripped into the Pats over their latest videotaping scandal.

.@TedyBruschi was pretty strong on the taping incident after the Fox video came out. pic.twitter.com/7b6hCmKaRN

“With everything good that’s going on with the organization this year in terms of the celebration of the NFL 100, talking about Bill Belichick as one of the best coaches of all-time, him and Saban this week talking about their philosophies and why they’re such great coaches. And then you get this, and all it does is open up that wound and open up that scab so everybody can just say ‘they’re cheaters’, once again.”

“What were we thinking? I’m a member of the New England Patriots for my entire career and I’m thinking ‘what were you thinking that this was a good idea to bring in a camera crew?’ Still, you want to do you Do Your Job series, I’ve seen it — with the video personnel, with Jim Weiland and the training staff — they’re good little pieces, yes. But this one? This was the wrong idea to do it. They weren’t thinking, they weren’t thinking what the optics were. And I don’t blame the league and I don’t blame anyone out there that reopens all of this stuff and give you an easy opportunity to call the New England Patriots cheaters because of all their success, because the way it looks it terrible. And I don’t like the way it looks, and I’m disappointed that someone didn’t have the awarness in that organization not to go through and say ‘wait a second, maybe we shouldn’t do this, because it doesn’t look good.”

When the metaphorical soldiers in your own army begin to speak out on the war crimes your troop has committed, you know you’ve got a serious issue on your hands. Bruschi is as ride-or-die about the Patriots as they come and even he can’t believe the stupidity and recklessness of this latest New England scandal.