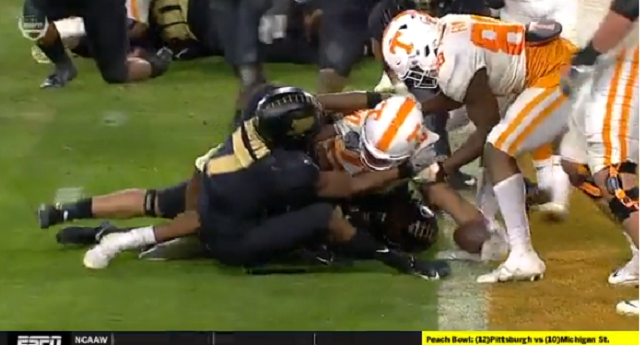 In overtime against Purdue, Tennessee decided to go for it on 4th and goal and appeared to get a touchdown when refs blew the whistle after running back Jaylen Wright crossed the goal line.

No whistle till after the ball crosses the line pic.twitter.com/Wk9XVwgqzX

After reviewing the call on the field, the refs decided forward progress was stopped on the play, and the whistle that came after the running back extended the ball over the goal line was irrelevant.

Refs said forward progress was stopped, the whistle came after the RB crossed the goal line… But they rule it was a 4th down stop for Purdue.

Purdue went on to kick a field goal to win the game on the next possession, and Volunteer fans blasted the refs over the controversial 4th and goal call.

Vols have now been screwed in Music City bowl overtime’s TWICE in the last decade. The NCAA is a joke and so are these refs. How do they keep their jobs after a game like that?! Let alone keep their pride and integrity.

Absolutely inexcusable. How do we not ever hold refs accountable for errors like this? These refs should be fired and no longer allowed to work. When you screw up this bad you don’t deserve employment as an official. pic.twitter.com/Ho7gGN6NR4

Refs really screwed the Vols over on that touchdown 🏈

Tennessee just got absolutely hosed by the refs. You’d think they were the team wearing Saints colors.