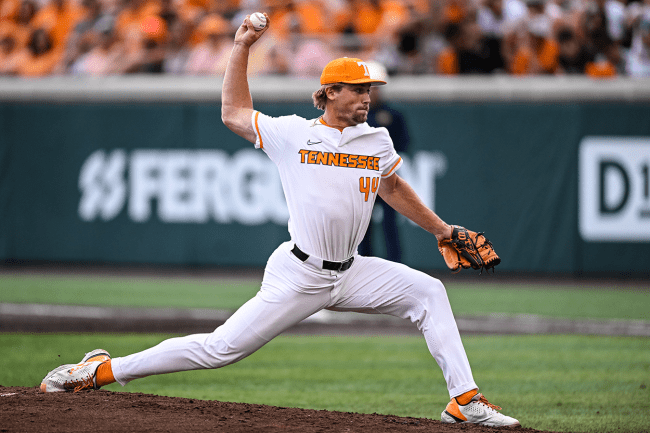 Tennessee baseball dropped the first game of its three-game Super Regional against Notre Dame, but pitcher Ben Joyce established himself as one of the top MLB prospects once again. After dominating college lineups all season, the 6-foot-6, 225-pound fireballer went to work against one of the most potent offenses in the nation.

Earlier this year, Joyce made his presence very clear on multiple occasions. He threw the second fastest pitch in baseball history, left MLB players in awe by pumping 103, drilled an umpire in the face at 102, and completely baffled hitters at 104.

On Friday he did something that had never been done before. Not on the collegiate level, not on the MLB level— never ever.

Joyce threw 29 pitches at 101 miles per hour or faster. That has never been done in the history of baseball.

In the process, Joyce threw 3.1 scoreless innings with two hits, three walks and five strikeouts. It was a vicious performance.

The Fighting Irish simply could not keep up with Joyce at 103.

They were simply too slow to drive 101 in play— even as he reached his 62nd pitch of the night.

It was a remarkable performance. A historic one, in fact. Over the course of the evening, Joyce set a baseball record and threw harder for longer than any pitcher that had come before..

Ben Joyce’s 29 Pitches at 101mph or higher (not including pitches that had no on-screen gun reading). pic.twitter.com/UHiyiA2KaP

It would be a shock for Joyce to slip out of the first few rounds of the MLB Draft. Teams may be concerned with his health long-term, but his upside is insane.