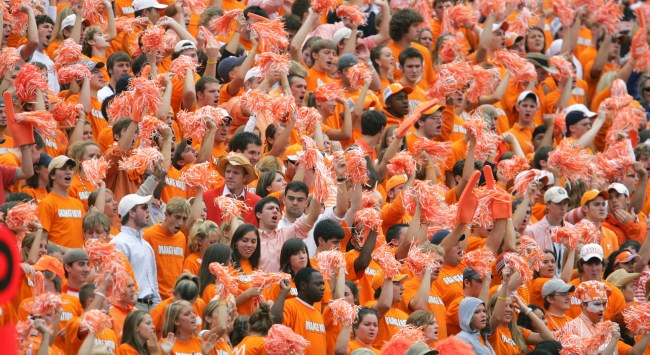 Tennessee fans are used to this whole coaching search thing, they’re veterans of the game. After firing Jeremy Pruitt, the program is currently searching for its sixth head coach since 2009. As per usual, Tennessee fans have their sites set on some of the biggest names in college football to come turn things around on Rocky Top despite a rather large, ugly NCAA cloud hovering over the program.

Volunteer fans are pulling out all the stops to be as up to date on the coaching search as possible and that includes tracking the university’s private plane.

Vol Twitter became very active over the weekend after someone shared that the school’s plane was set to leave Knoxville’s airport. The school set the plane’s tracking information to private, so the public couldn’t track it by the tail number, but you can never underestimate the Tennessee fanbase, it figured things out quickly.

@VolRumorMill they just loaded the plane! My pilot friend tried to track it but they set it to private 👀 pic.twitter.com/udG5Onap70

Somehow, someway, fans figured out how to get tracking information for the plane and the game had begun. The plane looks to have made a stop in Orlando over the weekend and made stop in Charlotte on Monday morning as well.

Tennessee plane is about to land in Orlando 👀 pic.twitter.com/qy2qjghInO

Looks like the Tennessee plane went to Charlotte this morning pic.twitter.com/2h5v4INCXV

Tennessee’s new athletic director Danny White has said that he’s going to keep things as tight to the vest as possible when it comes to the coaching search. So, who knows who is on this plane and what they’re up to? White may have sent a couple of boosters on a quick trip around the East Coast while he took a different plane to go interview some coaches.

It’s at the point now where Tennessee fans are more thrilled by coaching searches than winning meaningful football games. You can’t really blame them, however, because coaching searches get the fanbase fired up while 3-7 seasons absolutely do not.

Best of luck to White as he tries to make a hire the fanbase will agree with and not someone like Greg Schiano who Volunteer fans literally ran off before the school eventually hired Pruitt back in 2018.