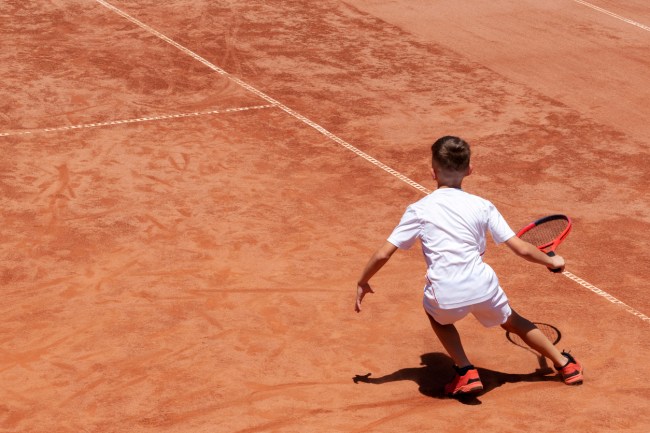 Ten-year-old tennis prodigy Teodor Davidov is changing the way that the game is played and taking names in the process. The fifth-grader from Denver, Colorado is ambidextrous on the court and never hits a backhand. Instead, Davidov changes racquet hands for every shot and only smashes powerful forehands.

Players have attempted the “all forehand” approach before and there has not been much success. World No. 888 Cheong-Eui Kim is the only active player on tour to hit ambidextrous forehands and peaked at No. 296 in 2015, but Davidov is on his way. He is 39-18 overall, 4-3 against 5-star recruits and 8-1 against 4-star recruits, earning him the No. 6 national ranking in his age group on Head Tennis’ recruiting lists. In his most recent tournament, Davidov reached the quarterfinals in the 12-and-under category at the Adidas Easter Bowl in San Diego.

Many assume that Davidov is ambidextrous off of the court, but he is actually right-handed and learned to play with both sides. His father Kalin and his mom Elena both have a background in sports and holistic medicine, and the family moved from Bulgaria to Colorado when Teo was born. They have also studied Chinese medicine, spent time in India studying yoga and ayurvedic medicine, and own a clinic in Denver where they do acupuncture, neuromuscular therapy and other practices.

Kalin, who is also Teo’s coach, decided to teach his son how to play with both hands. While playing only forehands will typically generate more power and allows for a longer reach, Kalin’s mentality was that it will alter Teo’s brain chemistry. He explained his reasoning to The Guardian:

“When Teo was about to turn eight years old, I decided he’s going to start playing left-handed, to affect his right hemisphere of the brain,” he said. “He’s way too extroverted, too fiery, a little too imbalanced, so I just wanted to affect the right hemisphere of his brain, using the left part of his body. It’s driven by philosophy too; I’m into Chinese medicine, we do yin and yang balance all the time, I do balancing treatment with my needles. I’m into yoga, right and left nostril activity and all that, so balance between the left and right hemisphere is crucial.”

In addition to his left-right training, he practices yoga, alternate nostril breathing and continues to workout through injury— using whichever arm isn’t sore to continue playing. He also enjoys skiing, hiking, soccer, ping pong and basketball, and dabbles on the piano.

Training 30 to 40 hours a week, both on and off the court, Teo is attempting to break the mold.

“No one can imagine what I’m doing, on the court, off the court, fitness. He does Olympic lifting several times a week, we go on the track and train like professional sprints. It’s not what you see on the court only,” said Kalin to The Guardian. “At home we have a gym, he would do short, explosive gym training like every day. It’s just an unbelievable amount of work.”

While the hand-switching approach to tennis seems like an innovative way to get ahead of the game, success typically fades as the player gets older. At a young age, with slower ball speeds, the in-game switch makes sense. However, as the ball speeds get faster with age, it becomes difficult to switch hands quickly enough to keep up with the pace of the game.

Kalin understands that notion and says that his son is also able to hit both two and one-handed backhands. He has presented Teo with options on how to play, allowing him to one day decide how he is comfortable. Russia’s Evgenia Kulikovskaya was ranked in the top 100 in the early 2000s while playing tennis with two forehands, and American Luke Jensen won the 1993 French Open men’s double title with his ability to smash big serves with either hand. They are the exception rather than the rule and Davidov wants to make the rule moving forward.