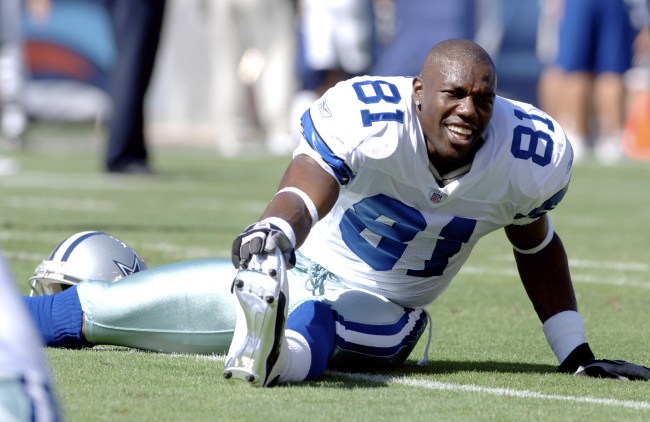 When the words ‘Terrell Owens’ are muttered in the sports media landscape, its often associated with his flamboyant antics or the perception that he’s a me-guy.

You don’t often hear about how Owens racked up 122 yards in the Super Bowl on a broken leg. Or how he outperformed his contract in Philly and was held at the mercy of the organization’s policy to refuse contract re-negotiations after they’re signed. Bottom line is that only Jerry Rice has more career receiving yards and only Rice and Randy Moss have more receiving touchdowns. By every football metric, Terrell Owens should be a shoe-in Hall of Famer. It’s not like he killed a guy, like HALL OF FAMER Ray Lewis (“”allegedly””).

But, Owens decided to skip the Hall of Fame ceremony in protest against the selection committee members who didn’t vote him in on the first ballot, likely due to his persona. Former Cowboys teammate Marcus Spears, who played with Owens for two seasons, appeared on Get Up! to stomp out the rumors that Owens was a bad teammate.

This has to come from dealings with the front office, because it has nothing to do with the locker room. First of all, it was two years during Wade [Phillips’] time, where we went 13-3 and 11-5. He was having a lot of success, everybody knows how good of a football player he was. He was one of the glue guys in the locker room. That is the reality. I can’t say it any other way – T.O. was not a bad teammate at all!”

I’d listen to the guy who was naked in the locker room for two years. He may have a bit more insight than these sports media talking heads.