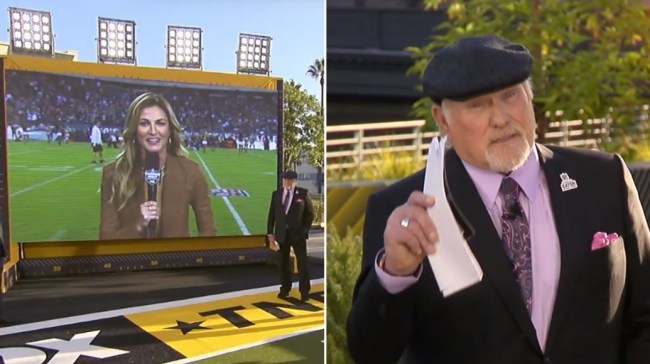 Terry Bradshaw has found himself at the center of controversy over some comments he made about Erin Andrews on Thursday night.

After the interview, Bradshaw started trending on Twitter because people were upset he complimented Andrews’ outfit.

“You got your Cowboy boots on and your shirt. You’re looking good and I enjoyed that interview”

Here’s the video of Terry Bradshaw complementing Erin Andrews since everyone is talking about it on my TL pic.twitter.com/OYqme6GGGs

This is why nothing will ever change with men in total control. Did anyone hear what Terry Bradshaw said to Erin Andrews? He went straight to how hot she looked in her cowboys boots while she was interviewing Devin White. He just said it out loud on National TV like it was okay.

Terry Bradshaw being cringe like with Erin Andrews is straight out of the Joe Namath playbook pic.twitter.com/Lo05cjJ6M3

Seriously though, I don't know the issue, but his reaction to Erin Andrews story proves Terry Bradshaw needs some help & shouldn't be on tv pic.twitter.com/9tLfFs0fNS

Uh Terry Bradshaw just dished some sexual harassment towards Erin Andrews on TV…wtf. When are we going to get these idiots out of media/sports.

Others weren’t sure why so many people were getting worked up over Bradshaw’s comments.

Terry Bradshaw is trending because awful people think he should be fired for saying this to Erin Andrews. https://t.co/DCCFdofgXg

…so now we can't compliment anyone because that's offensive?

Apparently Terry Bradshaw telling Erin Andrews that her outfit was nice is sexual harassment, according to Twitter. This place can be stupid very regularly.