Terry Bradshaw Lists Three QBs Ahead Of Tom Brady In The GOAT Conversation And He Can’t Be Serious, Right? 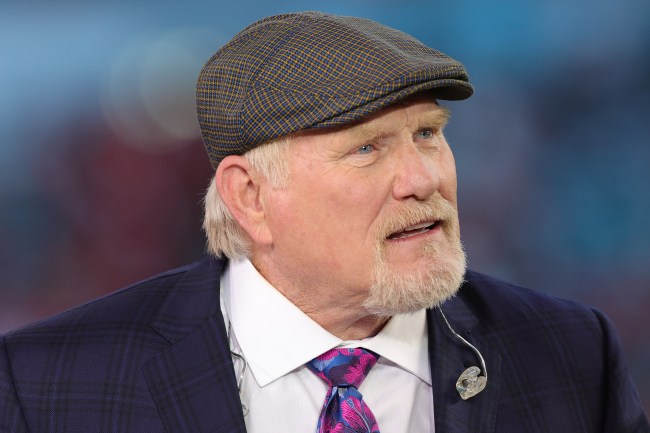 With all due respect to Terry Bradshaw, who has four Super Bowl rings to my zero, it’s hard to take some of the things he says seriously. Sure, the guy is in the Pro Football Hall of Fame after an illustrious career with the Pittsburgh Steelers, but, sheesh, as the bumbling comedic relief on FOX Sports’ NFL coverage, the guy seems to just spew shit out of his mouth without realizing he’s saying it sometimes.

Case in point? Bradshaw’s latest opinion about who the GOAT is when it comes to NFL quarterbacks, arguing that Tom Brady sure doesn’t qualify as it, and that, somehow, three signal-callers are ahead of the six-time Super Bowl champ.

Look, people can debate all they want to, but, for all intents and purposes, Brady is the GOAT, having gone to nine total Super Bowls and winning those six rings. In fact, outside of maybe Joe Montana’s four, there isn’t really a quarterback who can stake claim to the GOAT title. Of course, Terry Bradshaw thinks way differently, though.

As a recent guest on 93.7 The Fan, Bradshaw was asked about Brady’s move from New England to Tampa Bay — which he had previously bashed, having said Brady’s Ego got in the way of his decision-making — along with the suggestion that Tom Brady was the greatest of all-time. Not only did the former Steelers quarterback argue against that notion, he had the balls to list three guys who he thinks had better careers than Tom Terrific.

“Does he have more Super Bowls than anybody? Yes. Therefore, he’s the best. I absolutely have no problem saying it. If you’ve got the most Super Bowls, you can be in there, but I don’t put anybody as the greatest of all-time. Is he better than Montana? Not in my opinion. Is he better than Drew Brees? Yeah, maybe.”

Wait, seriously? Did Terry Bradshaw really say Tom Brady has less talent than Staubach, Fouts and Marino, therefore he shouldn’t be considered the greatest of all-time? That’s like saying a Steph Curry‘s better than Michael Jordan because he can shoot a basketball better. This whole thing comes across as straight up Brady hate — and Bradshaw sort of proved that with his comments about the drama still being talked about between Bill Belichick and his now former quarterback.

“It’s just a lot of things. I’m a little bit tired of all this soap opera going on between him and [Bill] Belichick,” Bradshaw said. “Look, he left because he wanted to prove something, and he wants to prove to everyone that he can win without Bill Belichick. Between all that, you say all the wonderful things [about Belichick] … but after 20 years, he’s leaving. You gotta be kidding me.”

Terry Bradshaw is an old school guy who doesn’t give a damn about all the headlines on social media about Tom Brady and Belichick’s relationship; and that’s understandable. But to even suggest that Brady isn’t among the top-3 quarterbacks of all-time is disrespect at its finest, because, let’s face it, given all the accolades Brady’s accomplished in his career, he’s the GOAT.